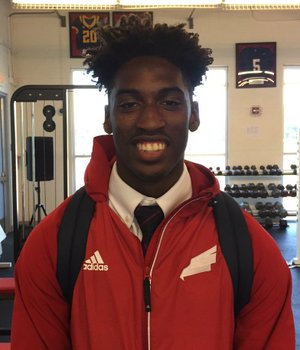 The Hogs are showing junior receiver Marquez Beason a lot of attention.

DALLAS — Arkansas is currently in highly regarded junior receiver Marquez Beason’s top 12 schools, and it appears the Hogs will make the next cut down to six schools in the near future.

“I’m going to try and cut it midway through season or at the end of the season,” Beason said,

Beason, 5-11, 175 pounds, of Dallas Bishop Dunne included schools like Arkansas, Texas, UCLA, Oklahoma, Texas A&M and Baylor on his list of top schools Aug. 4. He said the Razorback have a good shot of making the next cut.

The Arkansas coaching staff is the main reason for Beason’s high level of interest,

Beason has 11 receptions for 238 yards and 4 touchdowns along with 2 carries for 21 yards and a touchdown in two games this season. He also has 2 tackles as a defensive back. The Hog coaches like him as a difference-maker.

“They say I can come in and be a game-changer in their program,” he said.

Beason, who recorded 10.72 seconds in the 100 meters in the spring, has been talking to former teammate and Razorback freshman cornerback Chevin Calloway.

“He said it’s a great school and a great environment and a great atmosphere,” Beason said.

ESPN rates Beason the No. 21 receiver and No. 56 overall prospect in the nation for the 2019 class.

“I see myself being a true athlete and someone who can play several positions on the field, and I can make plays at anytime,” Beason said.

Beason hopes to make his way to Arkansas for a game.

“I’m going to try and visit this season," he said.