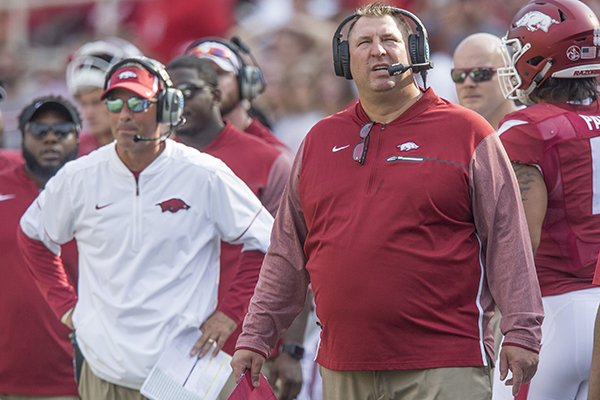 FAYETTEVILLE -- The Arkansas Razorbacks are looking for answers across the board offensively after gaining 267 total yards during a 28-7 loss to TCU on Sept. 9.

The Razorbacks (1-1) have had nearly two weeks for self-examination and making improvements heading into Saturday's 11 a.m. SEC opener against Texas A&M (2-1) in Arlington, Texas.

Senior quarterback Austin Allen said he has to make quicker decisions, trust his receivers and "let it rip" after completing 9 of 23 passes for 138 yards against the Horned Frogs. He said he tried to be too perfect and put more pressure than he needed to on himself.

Coach Bret Bielema said Allen has shaken off the disappointment of the TCU game.

"It's still the same kid that can really throw the football," said Bielema, adding that Allen's work in 7-on-7 drills Tuesday was the best he's had all season. "We had only one incomplete pass out of the entire session.

"I think he's feeling better and everyone around him is feeling more confident. There's a definite vibe in the program that will allow him to do what he does best. He doesn't have to do it all on his own. There are 11 guys involved, and he doesn't have to do everybody's job on his own. That's really calmed him down, and he's got a new perspective and hopefully things will be better come Saturday."

Senior wideout Jared Cornelius said his inability to produce a quality performance after a long layoff led the receivers down the wrong path against TCU.

The University of Arkansas, Fayetteville has the nation's 116th-ranked passing offense with 158.5 yards per game.

"It's taken us awhile to get a groove back," Cornelius said. "We have a lot of young receivers, so it's taken longer than we thought to get our groove, but I think we're getting it down."

Senior center Frank Ragnow said the offensive line "played a little tight" and did not execute well against the Horned Frogs.

Offensive coordinator Dan Enos said the passing game has to be more efficient to help unleash a better running attack. Arkansas ranks 56th nationally in rushing with 182.5 yards per game.

The Razorbacks ran for 129 yards against TCU, with 43 percent of that total coming on runs of 16, 26 and 13 yards by Allen, David Williams and Devwah Whaley, respectively, on one series in the third quarter. Allen also added a fourth-quarter scramble of 20 yards. Arkansas averaged 2.0 yards per carry on its other 27 runs.

On four snaps from the TCU 5 or closer, Arkansas managed a total of 1 yard.

Receivers coach Michael Smith said his unit put in extra work on timing with Allen during the bye week.

"Our guys just have to go out and be consistent," Smith said. "People are saying we're not creating separation, and that's my job as a coach to put those guys in those situations. Obviously, I didn't do a good enough job. But they'll be ready to go on Saturday.

Offensive line coach Kurt Anderson said he thought the game plan and week of preparation for TCU were sharp and on point. He boiled the red-zone failures down to one main culprit.

"I think it's execution," he said. "If you look at our week of preparation leading up to that game, we had the fewest mental errors and busts in the year and a half I've been here.

"Obviously we took a long, hard look at ourselves in terms of why we're not executing in certain situations, why we could execute throughout the week of preparation, and then get into the game and not execute in certain areas."

The Hogs have not announced any changes on their starting offensive line, but junior tackles Brian Wallace and Paul Ramirez might join in a rotation with Colton Jackson and Johnny Gibson.

The Razorbacks generated 491 total yards in last year's 45-24 loss to Texas A&M, but they took 15 snaps inside the Texas A&M 10-yard line and managed only 3 yards of total offense on those plays, which included an 8-yard touchdown run by Rawleigh Williams and a 5-yard touchdown catch by Cornelius. Three other series inside the 10 netted a field goal, a lost fumble inside the 1 and a stop on downs at the 1.

Allen absorbed only one sack, but he was hit multiple times by the Aggies.

"It's a classic football family he comes from," Sumlin said. "There's a term that people like to use: He's a baller is what he is. He moves around in the pocket. He's tough. He can throw it. He'll run for yardage.

"You've got to contain this guy. You've got to be able to keep him in the pocket, but you've also got to cover guys, because he can throw into tight windows."

"[Lafayette] was able to run the football with relative effectiveness vs. A&M last week," Stinchcomb said at the NWA Touchdown Club on Wednesday. "You know A&M, they lost playmakers on the outside from a pressure standpoint. They're going to have to generate that from the second and third levels.

"Louisiana was able to rip off some nice runs between the tackles. So there's opportunity there. It all depends on how these teams have responded since their last contest. Arkansas, having more time to prepare, I think you give a little more of an edge to."