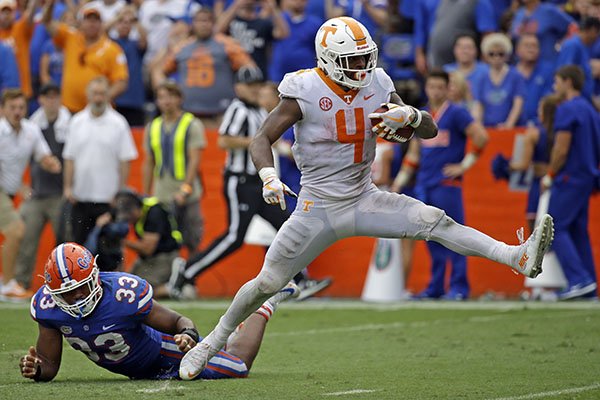 KNOXVILLE, Tenn. — Tennessee running back John Kelly talks throughout a game, whether he's motivating teammates or letting an opponent know about an impressive carry he's just made.

"My mom, she used to always say I talk too much anyways," Kelly said. "I guess it's still going."

Lately, he's had plenty of reason to be chatty.

The Southeastern Conference has three running backs who were named to The Associated Press preseason All-America team : LSU's Derrius Guice, Georgia's Nick Chubb and Alabama's Bo Scarbrough. Yet three weeks into the season, it's Kelly who leads the SEC with 349 yards rushing.

His 180 all-purpose yards per game rank sixth among all Football Bowl Subdivision players . He averages 6.2 yards per carry and also has 16 catches, matching the second-highest total in the SEC.

"Definitely what I was expecting," Kelly said. "I came out earlier in the season and I said that I was going to be the best running back. That's all I wanted to prove week by week. I've been saying that since camp started. I just wanted to go out and prove it every time. I'm glad with the numbers, but I mean at the same time, we've got to get some more W's."

Kelly started this season by scoring four touchdowns as Tennessee rallied from 14 points down to beat Georgia Tech 42-41 in double overtime. In a 26-20 loss to No. 20 Florida, Kelly ran for a career-high 141 yards and delivered a 34-yard touchdown.

The 5-foot-9 junior from Detroit will try to help Tennessee bounce back Saturday when the Volunteers (2-1, 0-1) host Massachusetts (0-4).

"Make no mistake about it, he's the heart and soul of our football team," Tennessee coach Butch Jones said after the Florida game.

Teammates say Kelly "runs angry," an approach that him a knack for breaking tackles. On his touchdown run against Florida , Kelly easily shed safety Chauncey Gardner's attempt at a leg tackle about 10 yards downfield and maintained his balance when linebacker David Reese - a former high school teammate - attempted to grab his waist from behind at Florida's 5-yard line.

"He's a full-contact back, that's what I really love about him," Tennessee offensive guard Trey Smith said. "JK, man, he gets me hyped in games just in the way he plays, the violence in which he plays."

His effectiveness led to criticism regarding his lack of red-zone carries last week. Tennessee passed the ball on each of its seven snaps inside Florida's 10-yard line last week and totaled just three points from three red-zone possessions. Tennessee did throw the ball to Kelly on three of those seven passes, including one that he dropped a couple of yards from the end zone.

Kelly was asked Tuesday if he lobbies for the ball in goal-line situations.

"Of course I am, that's just me being a running back," Kelly said. "A lot of the guys on our team, we trust whoever gets the ball in the goal line, in the short-yardage situations. I feel like I can definitely take advantage of it, too, if my name is called on."

Kelly's enthusiasm has proved costly on one occasion.

He capped his touchdown against Florida by doing the "Gator chomp," producing a taunting penalty that was assessed on the ensuing kickoff. Florida capitalized on the favorable field position to score a touchdown on its next possession. Kelly expressed regret about the penalty but said he intended to motivate his teammates.

"It was definitely a spur-of-the-moment thing," Kelly said. "I really wanted to do it to get our guys back into that game, to get them pumped up on the sideline, too."

His teammates didn't seem to mind. Wide receiver Marquez Callaway recalled a conversation he had with Kelly after the penalty.