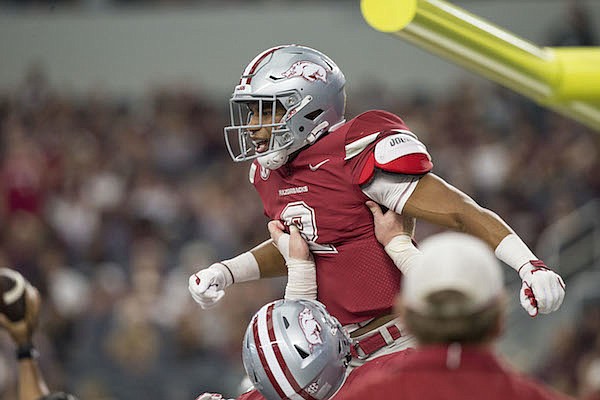 Frank Ragnow, Arkansas center, hoists running back Chase Hayden in celebration after Hayden ran for a touchdown in the second quarter against Texas A&M Saturday, Sept. 23, 2017, during the Southwest Classic at AT&T Stadium in Arlington, Texas.

FAYETTEVILLE — Arkansas running backs coach Reggie Mitchell made it a point to pull true freshman Chase Hayden aside after the 28-7 loss to TCU in the second week of the season.

Mitchell’s message was simple, one delivered after Hayden only carried the ball twice in the loss to the Horned Frogs.

“I told him, ‘Hey, Chase, that is totally my fault. We should have got you in there more.’ I said, ‘Moving forward, you’re going to be a big part of what you’re doing because you’ve worked hard and you deserve the opportunity to do it.”

Heading into the TCU game, Hayden was coming off a stellar debut in which he ran for a game-high 120 yards and a touchdown on 14 carries in the blowout win over Florida A&M. He showed the explosiveness he displayed all fall camp and was named SEC Freshman of the Week for his performance, which made his two-carry outing against TCU all the more puzzling.

That’s why Mitchell’s talk was a relief for Hayden to hear.

“For him to say that, that meant a lot to me,” Hayden said. “He just has to put the people he thought would do the best out there, so at the end of the day I needed to go to practice and show them and gain more trust from the coaches.”

During the bye week and leading up to the Texas A&M game, coach Bret Bielema and offensive coordinator Dan Enos swore the 5-foot-10, 191-pound Memphis native would be more involved in the offense moving forward. They weren’t lying.

Hayden appeared on Arkansas’ first possession against the Aggies, lined up at quarterback in the Wild Hog formation with sophomore receiver T.J. Hammonds coming in motion. Hayden never played quarterback or took a direct snap in high school, but it was hard to tell. His first carry went for 22 yards and was just the beginning.

“Actually it’s kind of easier,” Hayden said when asked to compare it to playing running back. “Because you’ve got a lot of two-way goes and you can cut back.”

Arkansas began working Hayden in the Wild Hog late in fall camp. The added dimension seemingly caught Texas A&M off guard and was successful. Hayden also produced an impressive 18-yard run lined up as a running back later, one that set up his second career touchdown run.

In all, he finished with 13 carries for 77 yards, both team-highs in the bigger role that was promised. Even if it hadn’t been, the message from Hayden’s father, Aaron, a former NFL player, was the same.

“He just said to go to the practice every day hungry like you’ve got something to prove,” Hayden said.

Moving forward, Hayden will be a part of the rotation along with senior David Williams and sophomore Devwah Whaley.

Williams started against Texas A&M and finished with 68 yards and two touchdowns on 11 carries. He was the back of choice late in the game.

“We were throwing the ball a little bit and he’s a little bit better in the protection as far as ID’ing,” Mitchell said. “He’s been doing it a little bit longer than guys. And then he got in a little bit of a groove.”

Whaley, the starter entering the year, was the third back on the field after sustaining a minor injury in a locker-room fight with receiver Brandon Martin. He sported a black eye Saturday, but ran for 38 yards on six carries, his 6.3 average the best of the backs.

Moving forward, Mitchell has an ideal workload in mind for Whaley, Williams and Hayden.

“We want to get them all touches in the first quarter and then after that, we’ll kind of go by series until a guy kind of takes over and then we’ll rotate them,” Mitchell said. “The way we figure, you get 10 carries for Chase, 15 for Devwah, 15 for David.”

Hayden’s work in the Wild Hog will be part of that as the Razorbacks continue to grow the package.

“Most of them were designed runs for me,” Hayden said. “We’re putting in a couple new steps. Some of them, it might be reads some time.”