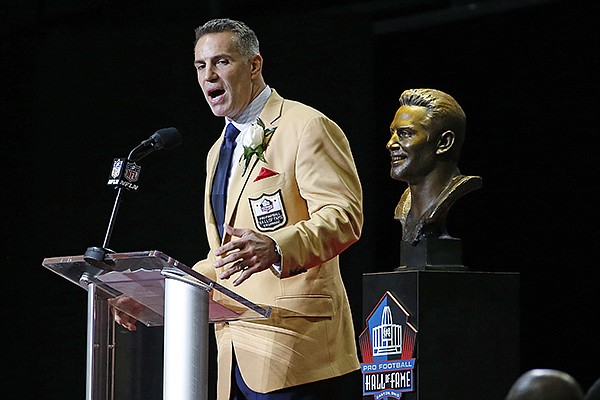 Former NFL player Kurt Warner speaks next to a bust of himself during an induction ceremony at the Pro Football Hall of Fame Saturday, Aug. 5, 2017, in Canton, Ohio. (AP Photo/Ron Schwane)

FAYETTEVILLE — Three with connections to the Pro Football Hall of Fame were added to the selection committee for the Burlsworth Trophy on Tuesday.

Hall of Fame inductees Kurt Warner and Bobby Bell were added to the selection committee, as was David Baker, president of the Pro Football Hall of Fame.

Warner was voted NFL MVP in 1999 and 2001, and in his first year as starting quarterback for the St. Louis Rams was named MVP of Super Bowl XXXIV. Bell was a seven-time All-Pro for the Kansas City Chiefs from 1965-71.

“We are very excited and honored to have these three very distinguished men join the Burlsworth Trophy selection committee," said Marty Burlsworth, president and CEO of the Burlsworth Trophy. "These gentlemen understand and appreciate the journey that all of our nominees have taken. Going from a walk-on to becoming a major contributor to your team is no small feat."

The Burlsworth Trophy, named for former Arkansas offensive lineman Brandon Burlsworth, was established in 2010 and is awarded annually to the top college football player who began his career as a walk-on. Oklahoma quarterback Baker Mayfield has won the award the past two seasons.

This year's Burlsworth Trophy will be presented at a Dec. 4 luncheon in Springdale.