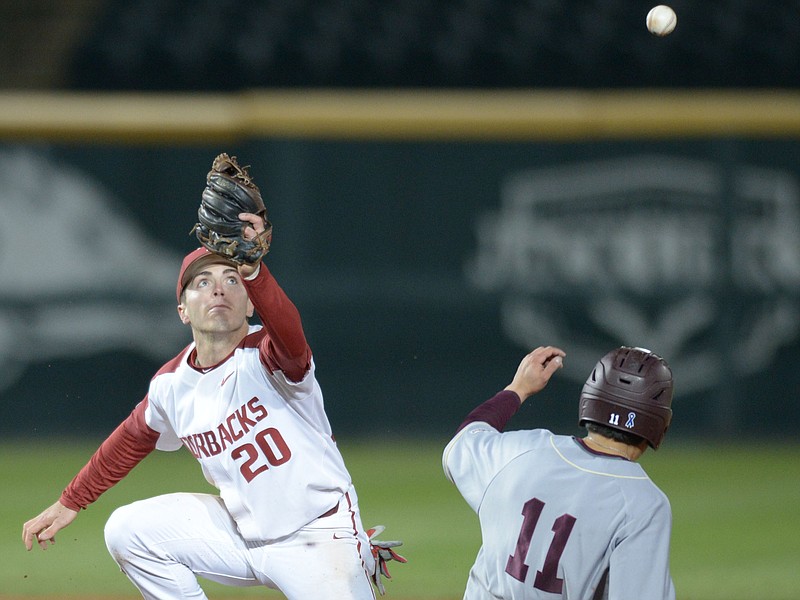 Arkansas coach Dave Van Horn put his team through a two-hour practice Monday. There was no hitting, just defensive drills.

It didn't show up on Tuesday night, but the No. 8 Razorbacks (20-9) overcame four errors to rally past Louisiana-Monroe, 10-9, with two runs in the 10th inning. They blew a four-run lead in the ninth then fell behind in the 10th on a suicide squeeze.

The Warhawks had hit only 17 homers - compared to 53 by the Hogs - ahead of Tuesday, but with the wind blowing out they got three against Arkansas, including a tying three-run blast in the bottom of the ninth from Peyton Lacoste.

Lacoste's one-out drive off of reliever Kole Ramage followed a run-scoring error by Heston Kjerstad on a line drive to left near the warning track.

“Sometimes you win one you don't deserve,” Van Horn said. “I'm not saying we didn't deserve it because we kept fighting.”

Van Horn said the game “ended up being exciting, but we didn't play well. Give them credit; they clutched up two or three times, but we climbed back.”

ULM (15-13) took a 4-2 lead through three innings with two homers off UA starter Jackson Rutledge. The Hogs turned it over to the bullpen for the final seven innings, allowing one earned run.

Jake Reindl and Barrett Loeske pitched five scoreless innings as the Hogs claimed an 8-4 lead, mostly on Evan Lee's three-run homer in the sixth and a pair of manufactured runs in the seventh and eighth.

The Warhawks scored four unearned runs in the ninth. Things began to unravel for Ramage with one out when his third strike pitch got past catcher Casey Opitz and the batter reached. The fly ball that bounced off the heel of Kjerstad's glove would have been the second out, but could have been the third without the wild pitch.

“The killer (error) was the fly ball to left,” Van Horn said. “Kjerstad got back on it and I think he just took his eye off it and it went off the heel of his glove. You had the inning get started with the strike three back to the screen.

“Ramage had actually pitched pretty well. Reindl kept us in it and we could have left him out there, but he was up to 47 pitches and we want him on the weekend.”

Van Horn critiqued the other errors, too. Carson Shaddy had a spinning grounder slip from his hand in the second inning, but that one proved harmless. Casey Martin booted a bunt in the second, just ahead of a three-run homer. Optiz threw wild to third on a steal attempt, short-hopping the ball ahead of the runner.

“Carson should have fielded his with two hands,” Van Horn said. “Casey was charging and that sometimes happens.

ULM returned the gifts in the bottom of the 10th. Martin scored the winning run on the shortstop's wild throw to the plate, trying for a bases-loaded force out on Jordan McFarland's bouncer against the drawn-in infield.

Eric Cole opened the 10th with a single to deep shortstop. Martin bounced back to the pitcher, but second baseman Brian Barefoot was not on the bag before releasing the throw late to first and both runners were safe.

Van Horn had a choice with his best hitter coming to the plate. Would he bunt Kjerstad?

“He is so hot, I wasn't bunting him,” Van Horn said of the freshman who finished 3-for-6.

Kjerstad delivered with an opposite-field single to score Cole without a play at the plate.

Dominic Fletcher was bunting, but ULM closer Keegan Curtis hit him on the wrist to load the bases.

Kjerstad narrowly missed a home run in the third. With a big wind howling straight out to right, Kjerstad pulled a blast that landed in Lake Norm well beyond the ULM bullpen.

It was ruled foul by first base umpire Jason Blackburn, although it appeared it was well inside the pole when it went over the fence. Van Horn argued, but the call was upheld after checking video.

“I knew they weren't going to change that,” Van Horn said. “There's no way you can tell on video.”

Van Horn was looking down the line.

Van Horn argued over another close call in the bottom of the ninth. With a runner at second, Lee's bouncer looked like it went over the first base line foul. But it was ruled fair and Lee was out.

“I thought we should have had another swing there,” Van Horn said, adding that Lee was terrific in all areas as the designated hitter and winning pitcher.

The Hogs used five pitchers Tuesday and will have limited options for the 3 p.m. Wednesday game. Freshman right-hander Caleb Bolden will get the start.

ULM used six pitchers, including a weekend starter and its closer. The Warhawks didn't announce a starter for Wednesday.