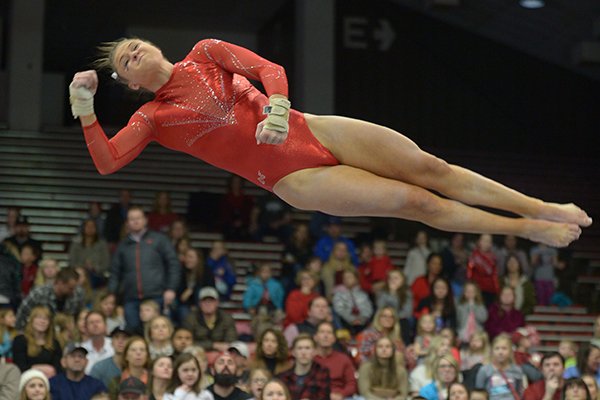 Arkansas' Amanda Wellick competes Friday, Jan. 12, 2018, in the vault portion of the 11th-ranked Razorbacks' meet with sixth-ranked Kentucky in Barnhill Arena in Fayetteville.

Arkansas finished second at the NCAA Columbus Regional on Saturday with a score of 196.775 and advanced to the NCAA championships in St. Louis. It will mark the Razorbacks’ seventh trip to the national championships and first since 2013.

Arkansas assistant coach Jaime Armbrust has been named the South Central Region Assistant Coach of the Year by the National Association of Collegiate Gymnastics Coaches/Women.

With Armbrust coaching the team’s balance beam squad, the Razorbacks set four of the highest individual scores in program history in the event this season. That includes two separate 9.975 scores from freshman Sophia Carter against Georgia, and in Arkansas’ tri-meet against Denver and Iowa State. In the meet against Georgia, sophomores Michaela Burton and Jessica Yamzon tied the previous record score of 9.950.

Armbrust, in her fifth season as an assistant with the Razorbacks, has led the group to event scores of 49.000 or higher in 12 of 13 meets this season.