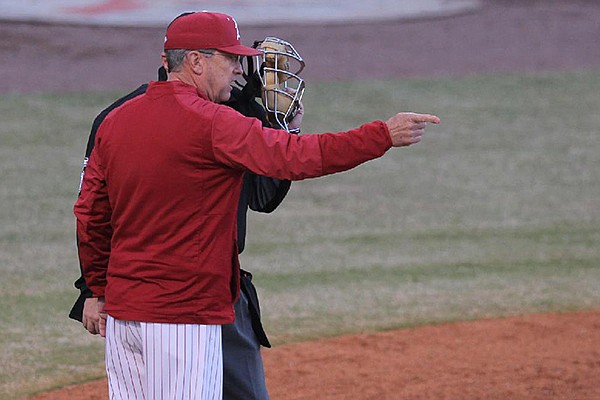 NORTH LITTLE ROCK — When Carson Shaddy crossed the plate to give Arkansas the go-ahead run in the eighth inning Tuesday night, Razorbacks coach Dave Van Horn was first out of the dugout.

The normally reserved Van Horn was one of several in red who spilled out to fist pump and celebrate a four-run inning that matched Grambling's four runs in the top of the eighth. Arkansas closer Matt Cronin retired all three Tigers he faced in the ninth and the Razorbacks held off an upset bid, 7-6.

"I was fired up, man," Van Horn said. "We had finally gotten the lead (in the seventh inning) and then all of a sudden you're down three, it was pretty frustrating. The guys were pretty into it in the dugout. It was fun to be around.

Why the reason for excitement?

"Any game is a big game, especially when it's that close," said Eric Cole, whose two-run single with two outs in the eighth inning scored Shaddy from first base. "Especially in front of these fans who come out here for us, it's a big deal. It really is. A lot of people look past it, but every team in college baseball is going to be good in one way or another. I think that's why there are so many upsets and so many close games. You can't look past anybody.

"I think it's a big deal we came out with that win."

Grambling (16-17) is far from the best win of the year for the No. 3 Razorbacks, but a loss would could have been devastating to Arkansas' quest to be a national seed in the NCAA Tournament.

Grambling, a member of the Southwestern Athletic Conference, was ranked 282nd in the NCAA's RPI coming into the day.

The Tigers gave the Razorbacks an unexpected look by throwing eight pitchers, including three weekend starters. It kept Arkansas off-balanced for much of the night. The Razorbacks had only one run through six innings.

"I didn't think they would come back with all their weekend guys," Van Horn said. "They only went two innings with their Tuesday starter and it kind of surprised me because we hadn't scored.

"About the fourth or fifth inning they started coming with all their guys. It was like we hit those guys better. Maybe it's because they threw a little harder and more like what we're used to."

Van Horn attempted to use the game to gain some experience for lesser-used players. The lineup consisted of five players who are not everyday starters and the first three pitchers were freshmen.

But Van Horn told his older players to be ready. As the game went along, more began getting into the game as pinch-hitters, pinch-runners or defensive replacements.

After Hunter Wilson scored on a fielding error to give the Razorbacks a 3-2 lead in the seventh, all eight position starters had entered the game.

"I told the guys before the game, 'I'm going to end up playing all of you before it's over with....This is going to be a team effort,'" Van Horn said. "I played all of the starters except for (Luke) Bonfield and I'm saving him for a big hit in the 10th if that's what it took."

Grambling, which averages more than seven runs per game, had four hits and a hit batter in the eighth to regain the lead. All four runs came off Kole Ramage, who had shut down the Tigers through his first two innings out of the bullpen.

Trailing 6-3, Van Horn told his players they hadn't had their big inning yet. Then the Razorbacks delivered the firepower they were accustomed to showing.

Dominic Fletcher led off the eighth with a double, then Jordan McFarland and Casey Martin followed with consecutive singles. Shaddy walked, Grant Koch struck out and Jax Biggers hit a sacrifice fly to bring Cole to the plate with two outs.

Hitting from the left side, Cole hit a hard grounder past the first baseman. The Tigers' right fielder slightly bobbled the ball and Shaddy never hesitated to run home. He slid into home just under the glove of catcher Drexler Macaay, injecting energy in what was left of a crowd of 8,470 that had sat quiet for much of the game.

Several people left after Grambling's four-run eighth, perhaps thinking a three-run deficit with six outs left was too big of a hole for an offense that leads the Southeastern Conference in hits and runs scored.

"We had faith in ourselves the whole game," Cole said. "This offense can score however many runs any inning that we have three outs for us. It's really nice going up there with some confidence, knowing we can come back from any deficit, any point in the game."

It was the third consecutive Tuesday that Arkansas found itself needing to rally for a one-run win. The Razorbacks overcame a poor start to beat Memphis 8-7 two weeks ago and had to overcome their poor defensive play to beat Louisiana-Monroe 10-9 in 10 innings last week.

"I've had a lot of teams over the years that couldn't do this," Van Horn said. "Once you learn how to do it, you feel like you can. It doesn't mean it's going to happen every time, but you've done it, so you know it's in there. You could tell in the dugout they believed."

The game played out like most of the Razorbacks' others in North Little Rock. It was Arkansas' ninth at Dickey-Stephens Park, where it is 8-1 overall but has played seven games decided by one or two runs.

"It's a good experience for us. We find a way to win and if we lose, we lose. It was good to come back and get that win."