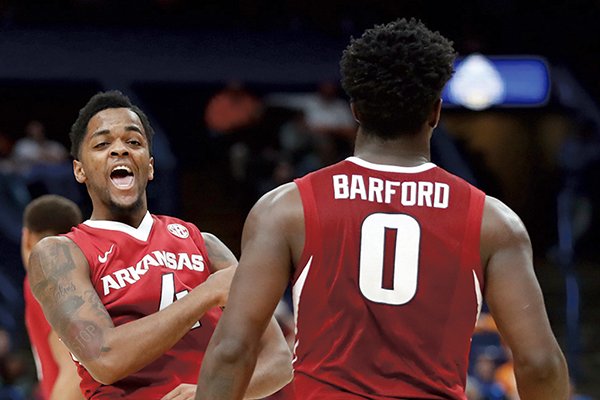 Jaylen Barford was named MVP of the Portsmouth Invitational Tournament in Portsmouth, Va., last weekend and Daryl Macon finished with a tournament-high 23 assists.

FAYETTEVILLE -- Former Arkansas Razorbacks Jaylen Barford and Daryl Macon -- both 6-3 guards -- made sure they stood out among the 64 college basketball seniors playing at the Portsmouth (Va.) Invitational last week.

Barford, from Jackson, Tenn., was named the tournament MVP and averaged 19.3 points, 6.7 rebounds and 3.0 assists in 23.3 minutes to lead his Sales Systems team to a 3-0 record and the championship.

The only player to score more points than Barford was Oakland (Mich.) University guard Kendrick Nunn, who averaged 20.7.

Macon, from Little Rock, averaged 10.7 points, 7.7 assists and 4.0 rebounds in 25.3 minutes and helped his Portsmouth Partnership team to a 2-1 record.

Macon's 23 total assists led the tournament as he edged former Florida guard Chris Chizzo, who had 22.

The Portsmouth Invitational has been played annually since 1953 and features seniors exclusively as a showcase for NBA scouts as well as representatives of foreign teams.

Barford became the second player coached by University of Arkansas, Fayetteville Coach Mike Anderson to be named the Portsmouth Invitational MVP along with DeMarre Carroll, the former Missouri forward who won the award in 2009 after helping Anderson's Tigers to an NCAA Tournament Elite Eight appearance.

Barford and Macon, who both transferred to Arkansas from junior colleges, each earned All-SEC honors this season and became the sixth and seventh Razorbacks to score more than 1,000 points in two seasons. They were the first teammates to join the 1,000-point club in the same game when the Razorbacks beat Auburn 91-82 on senior night in Walton Arena.

Barford finished with 1,087 points to rank 33rd on the Razorbacks' career scoring list. Macon is 34th with 1,070 points.

The addition of Barford and Macon helped the Razorbacks to a combined 49-22 record -- including 22-14 in the SEC -- the last two seasons with back-to-back NCAA Tournament appearances.