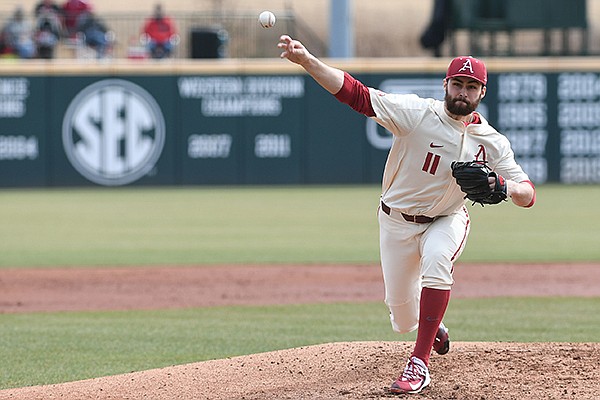 Arkansas pitcher Keaton McKinney throws during a game against Bucknell on Sunday, Feb. 18, 2018, in Fayetteville.

FAYETTEVILLE — There is a chance redshirt junior Keaton McKinney will not pitch the rest of the 2018 season, Dave Van Horn said Monday.

"Keaton may not be available for a long time - maybe for a while," he said. "It's nothing major, but it's enough to keep him out maybe the rest of this season and get ready for next year."

McKinney led the Southeastern Conference with a pair of complete games in 2015 and was named Freshman All-America by Louisville Slugger. A hip injury caused him to need surgery after his freshman season and he struggled as a sophomore when he recorded a 6.66 ERA in 13 games, including 12 starts.

McKinney then underwent Tommy John surgery last February after hurting his elbow in a preseason practice.

He has not pitched since Arkansas' 3-1 win against Bucknell on Feb. 18.