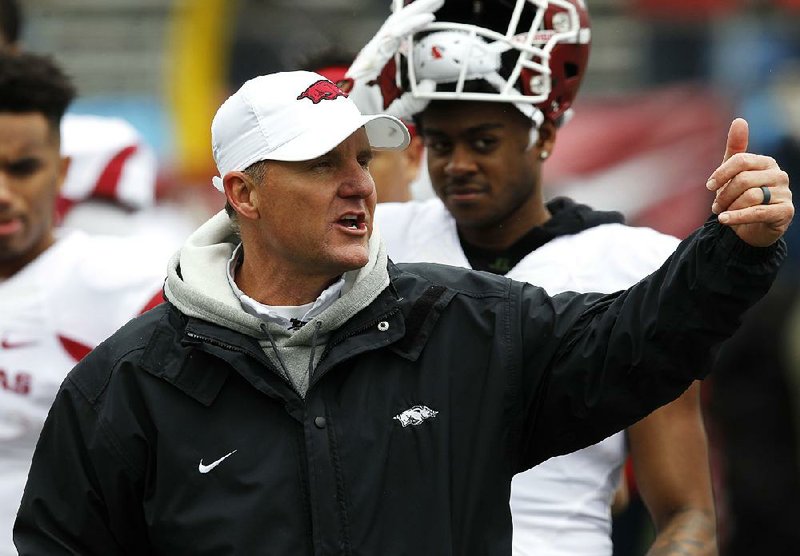 Being from Texas, sophomore cornerback RJ Mickens experienced terrain much different than what he's used to when he traveled over the weekend to visit the University of Arkansas, Fayetteville.

"I'm not too used to seeing hills like that, and there was like fog where you couldn't see the top of the hills on our way back," Mickens said. "It was a little bit cooler climate. They were telling me about how you get all four seasons ... like it snowed at the spring game and all that. That's a little different, but I like it."

Mickens, 6-1, 180 pounds, 4.53 seconds in the 40-yard dash, of Southlake Carroll High School has 25 scholarship offers from schools such as Alabama, Texas A&M, Clemson, Georgia, LSU, Michigan, Ohio State and others. The Hogs offered him on April 4.

He enjoyed the atmosphere around the football complex and campus.

"It's like real laid-back," Mickens said. "I like the environment up here. It's a real natural type of feel."

Mickens' father Ray was a three-time All-Southwest Conference cornerback at Texas A&M from 1993-1995 before going on to play 11 seasons in the NFL with the New York Jets, Cleveland Browns and New England Patriots.

The younger Mickens enjoyed being around cornerbacks coach Mark Smith during the visit.

"Coach Smith is a real cool guy," Mickens said. "He's real positive. Always smiling. He keeps it real. He'll tell you the truth. I like the fact there's good energy around him."

Smith, the other coaches and people associated with the program made Mickens feel welcomed.

"The hospitality is the word I'm looking for," he said.

Mickens was a play-maker for the 10-4 Dragons on both sides of the ball last season. He scored 9 touchdowns on 14 receptions for 298 yards while recording 99 tackles, 3 tackles for loss, 13 pass breakups, 2 interceptions, 1 returned for a score, 4 forced fumbles and 2 recovered fumbles. He also returned 8 punts for 159 yards and a touchdown.

CBS Sports Network national recruiting analyst Tom Lemming, who rates him a four-star prospect, said Mickens has the tools needed to be an outstanding cornerback.

"I loved watching him at cornerback," said Lemming, who's closing in on 40 years of covering the national scene in recruiting. "Shows excellent technique and certainly has the length. He has the quick hands and the instincts you look for in an outstanding cover corner. I was impressed with his burst vision and most of all production."

"Of course they told me they wanted me a lot," Mickens said. "I got to sit down and break down some film. I got to learn some new things and hang around the facilities."

Mickens, who's looking to visit Fayetteville for a game in the fall, wasn't surprised by the Razorbacks' nice facilities.

"The facilities were nice," he said. "I mean, all schools kind of have the same ... they're all starting to catch up with the facilities. They're all kind of similar, but the facilities are really nice and the campus is nice, too."

The Hogs made a strong impression on Mickens.

"I like Arkansas," Mickens said. "They'll be in my top schools moving forward, but I'm also looking at some other schools, too."