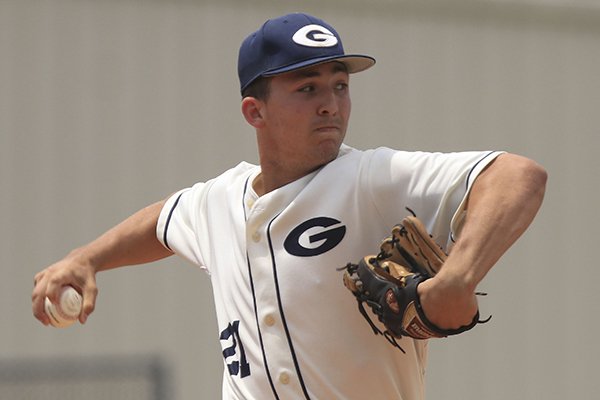 Greenwood pitcher Connor Noland throws during a Class 6A State Tournament game against Sheridan on Monday, May 15, 2017, in Benton.

GREENWOOD — Minutes after throwing the first no-hitter of his high school career on Monday night, future Arkansas baseball and football player Connor Noland (6-3, 210 pounds) spoke about goals for his freshman season on the diamond with the Razorbacks.

It should come as no surprise that Noland (7-0, 0.76 ERA with 87 strikeouts in 47 2/3 innings) wants to dive headfirst into SEC action as soon as possible and become a weekend starter.

“I think it is attainable,” Noland said. “I am coming up there to compete. I want to be a weekend starter and that has always been my goal. When I was growing up, I dreamed of pitching on Friday night for Arkansas. That’s still my dream, but I will do anything to help the team.”

After he tries to follow up leading Greenwood (26-3 with 17 straight wins) to a state baseball championship next month as he did the football team in December, Noland will be on the campus before the No. 7 Razorbacks (29-13) end their 2018 baseball season.

“I’ll be up there on May 27th and if they are playing, I’ll be right in the stands supporting them and wishing for the best,” Noland said. “I hope to get to see them host a (NCAA Tournament) regional and super regional.

“They are competing out there, hitting the ball really well, pitching their tails off. It is exciting to see that and all the fans are really into it."

Noland recently sent a a letter to all 30 MLB teams stating he would attend college. Some projections have Noland as a potential top 20 round pick.

“I talked to my family and they just thought it was best, too,” Noland said. “The college experience is really something that you can’t buy. I think the relationships and connections I make up there are worth more than money.

“It’s priceless thing, that’s what we think, it’s a decision that I made, we’ve stuck with it and here we are today.”

Noland, who is also hitting near .500 with a dozen steals, was pretty clear on where he would have been drafted if he had chose to take that route.

“Coach Van Horn is a big believer that you come to college, you get a mentality and its part of the mental part of the game, helps you become a grown man," Noland said.

“If you come out of high school, you are going to be in rookie ball, riding buses around while trying to make your way up while at Arkansas you will fly to games, be back the same day and it is just a totally different experience and one I want to have.”

Greenwood baseball coach Trey Holloway, a former Arkansas pitcher, knows how Noland feels in wanting to be a Razorback.

“For him, being a Razorback is a really big thing to him and something he has wanted to be since he was a little kid,” Holloway said. “It was a bold statement and there are some scouts who may be upset, but I am glad it is going to work out for him. He is going to get a chance to play both sports at the University of Arkansas, something that has not been done by many.

“You look at a few guys who have been able to do basketball and football like Matt Jones, but doing it at the level that he is going to be doing it - as quarterback and a pitcher - it is going to be a tough deal for him, but if anybody is able to do it, I know that he can handle it.”

Noland is excited for he chance to work with Arkansas pitching coach Wes Johnson.

“He is a great guy with a lot of energy,” Noland said. “He is a fireball and is just all over the place, but he is a great coach. I love the energy he brings. I am excited to get up there. He is a big (velocity) guy so that is going to be good for me.”

“The biggest thing for him is he has a breaking ball that is already a swing-and-miss pitch,” Holloway said. “Most high school guys don’t have that until that get to college and have to develop something that they can throw in the dirt.

“That’s a thing we have been working on for four years and he can executed it up and down, left and right. He can do anything. So the execution part is not a big deal for him and he feel is what is phenomenal as well.

“The thing for him to learn at the (college level) is just that you can’t miss spots 3 inches above the knees are they will punish mistakes. It will just being able to handle that. He can just throw it by high school hitters, but the big thing will be to make sure he is constantly hitting his spots and keeping the ball down and he did that today.”

Noland has pretty good gas on his fastball, but also the knowledge of when to temper it.

“He has been hitting 89 to 92 normally and 93 and 94 at times and tonight - while I didn’t have a gun on him - was likely 88 to 91,” Holloway said. “That’s him trying not to do too much because he understands when he is trying to overthrow he elevates the ball, so he just stays within himself.”

Noland, who also has a save this season, has given up just 17 hits. In addition to his no-hitter Monday, he has thrown two one-hitters.

He needed only 84 pitches - 58 strikes - to throw the no-hitter Monday in a 5-0 win over Russellville.

Noland struck out 14 of the 22 batters he faced and missed a perfect game because of an infield throwing error in the second inning that came after he had fanned the first four hitters.

Holloway knew a no-hitter could eventually come because of Noland’s arsenal of pitches.

“As good as he’s been over the past four years, that’s his first no-hitter,” Holloway said. “The first couple of innings, I thought he was going to try to strike everybody out, which is fine and I want him to but that also gets him up there in pitch count. He did a phenomenal job. His breaking ball was really good. He’s developing into a big-time pitcher.

Greenwood’s players didn’t really celebrate after the no-hitter. Instead, they just shook hands and Noland was rather calm about it himself.

“He’s been around it and he knows how special it is and it was a special moment for him,” Holloway said. “I’m surprised he hasn't thrown a couple more in the last four years, but it was just another game to him and that’s what makes him great.

“He knows he has big things ahead of him, that it was just another game where he knows he just needed to do what he does.”