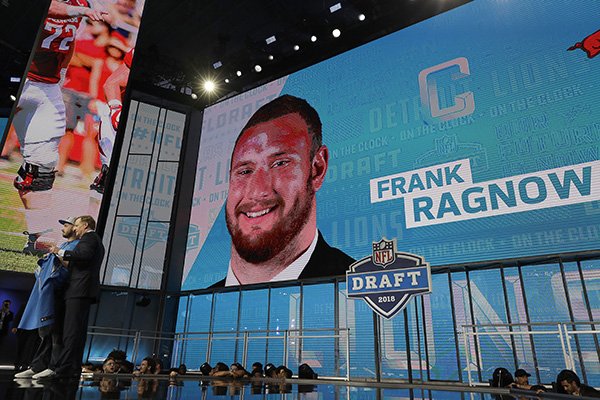 Commissioner Roger Goodell, left, poses with a fan after the Detroit Lions selected Frank Ragnow during the first round of the NFL football draft, Thursday, April 26, 2018, in Arlington, Texas. (AP Photo/David J. Phillip)

FAYETTEVILLE — Frank Ragnow was the first-round selection of the Detroit Lions on Thursday, but at least two other NFL teams were reportedly prepared to select him with their first pick.

Citing unnamed sources, the Detroit Free Press reported the Cincinnati Bengals would have selected Ragnow with the pick after the Lions, and the New England Patriots - who are using former Arkansas coach Bret Bielema as a consultant - explored trade opportunities to move up from three spots behind Detroit.

Ragnow, who could play center or guard, was selected 20th overall by the Lions. The Bengals selected Ohio State center Billy Price 21st overall and the Patriots selected Georgia guard/tackle Isaiah Winn with the 23rd pick.

The Lions had not shown much interest in Ragnow before making the selection and had only spoken to him once, at the NFL Scouting Combine in March.

"We had a good meeting there," said Bob Quinn, the Lions' executive vice president and general manager. "He was a guy that was pretty clean through the process. He’s coming back from an injury that he missed the second half of the season with an ankle. Other than the injury, he was a real clean prospect that I didn’t really feel like we needed to do a whole lot of extra work on in terms of visit here or private workout or any of those things.”

Quinn said the Lions left multiple offers on the table from other teams looking to move up in the first round.

"Everything we’re about is kind of what he is, so at that point in time it was a real easy pick," Quinn said. "He was a guy we kind of had our eyes on for a while and it kind of worked out that way.”

Ragnow said he did not expect to get the call from the Lions.

"They actually mentioned that on the phone that they really tried to keep it under the radar," Ragnow said. "They were interested in me and I was very surprised, but I’m so, so, so excited to be a Detroit Lion.”

Ragnow, a Victoria, Minn., native, grew up a fan of the Minnesota Vikings, one of the Lions' division rivals. He said he is excited to be playing in the NFC North.

"It’s a great division with a lot of great organizations, especially the Detroit Lions," Ragnow said. "I can’t believe I’m a part of the team, the organization and I’m just really excited to get to work.”

Detroit was in need of an interior lineman to replace Travis Swanson, the former Arkansas center who started 42 games over the past four seasons for the Lions. Swanson signed a free-agent contract with the New York Jets on April 4.

Swanson suffered season-ending concussions late in 2016 and 2017, and the Lions moved starting guard Graham Glasgow to center following both injuries. Quinn said the Lions have time to decide whether Glasgow or Ragnow will play center in 2018.

"We’ve got two guys that are versatile that can play multiple spots," Quinn said. "So, I think we have a lot of options.

“When it comes down to it, you know, during the regular season we have 46 spots on the gameday roster. So, we bring seven linemen (that) are dressed, so you’ve got to do the math. If you have seven linemen dressed, guys have got to play multiple positions if someone gets hurt."

Ragnow said Swanson sent him a congratulatory text message after he was drafted Thursday. The two never played together at Arkansas, but grew to know each other during Ragnow's college years.

"He’s a great person and a great mentor, and I’m very thankful for him," Ragnow said.

"He’s on to new opportunities and I’m on to living my dream."