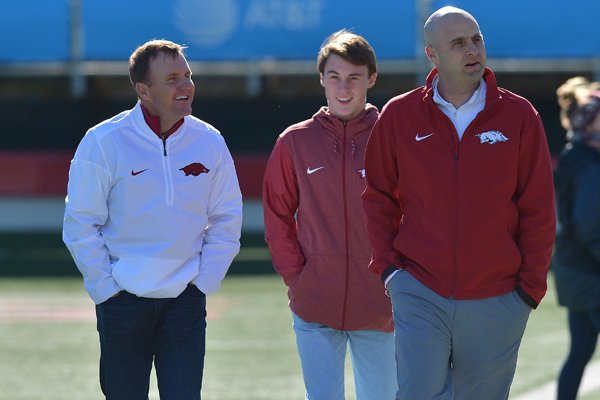 ARLINGTON, Texas — Now that the Arkansas football program is back in the business of recruiting full-time in the state of Texas, events like Nike's The Opening Regional Camp on Sunday allow for the opportunity to see plenty of prospects in one place.

There are expected to be around 600 players - a majority of them from Texas - on hand from 10 a.m. to 5 p.m. at Euless Trinity High School, although there will also be players from Arkansas, Oklahoma, Georgia, Florida, Louisiana and Hawaii.

Baton Rouge, La., Southern Lab tailback Chavis Thornton was offered by the Razorbacks this week as was Mansfield defensive back Miles Williams and both are set to be in attendance.

Amite, La., wide receiver DeVonta Lee took an unofficial visit to Fayetteville recently and will be on hand Sunday for the event.

Some Oklahoma products involved with Arkansas and signed up include defensive end Trace Ford of Edmond Santa Fe and Broken Arrow defensive back Myles Slusher.

Jackson, Miss., Academy wide receiver Jai Mason and Oklahoma tailback commit Jase McClellan of Aledo, Texas, are two 2020 prospects that the Razorbacks have had contact with so far.

Highland Park quarterback Chandler Morris, the son of Arkansas head coach Chad Morris, is also slated to be on hand. He is in line to take over for Razorback signee John Stephen Jones and try to win the school a third straight state title.