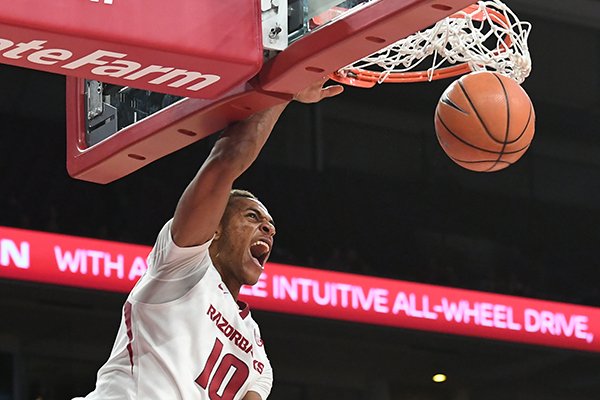 FAYETTEVILLE -- Arkansas Razorbacks sophomore forward Daniel Gafford is back on campus after being in Los Angeles for the Nike Basketball Skills Academy.

Gafford was among 25 college players at the camp run by NBA star LeBron James -- who signed with the Los Angeles Lakers as a free agent in the offseason -- from Aug. 8-12.

University of Arkansas Coach Mike Anderson said he heard good reviews about Gafford's performance at the camp from people who were there.

"I think that sets up for hopefully a tremendous sophomore season for him," Anderson said Friday night when he was the honoree at the ninth annual Burlsworth Foundation Legends Dinner. "When you go out there, you can get your confidence up, because you're going against some of the better players at your position in the country."

The camp also featured several NBA players working as instructors, and sometimes they took part in games. Anderson said Gafford texted him about playing with Kevin Durant -- one of the stars of the NBA champion Golden State Warriors -- and against James.

"Can you imagine playing with those guys out there?" Anderson said. "Not only that, but getting a chance to really go out and apply your craft -- the things that you worked on throughout the summer -- and see if they're where they should be."

Jeff Goodman, a college basketball analyst for the Stadium website who previously worked for ESPN, had a tweet praising Gafford's play in Los Angeles.

"One NBA exec on Arkansas big man Daniel Gafford from the Nike Skills Academy: 'He was awesome. Monster on the glass. Both ends,' " Goodman tweeted. " 'Was finishing & dunking everything. Runs the floor well, switched onto the guards and did a good job of defending. Really affected shots in the paint.' "

Gafford, who is from El Dorado and has a 7-2 wingspan, according to the Nike camp roster, averaged 11.8 points, 6.2 rebounds and 2.2 blocked shots in 22.6 minutes in 35 games as a freshman last season.

His size, athleticism and skills caused Gafford to shoot up NBA Draft boards, but he chose to return to Arkansas for his sophomore season.

Gafford is listed as a top 10 pick in several 2019 NBA mock drafts.

Gafford is one of three players returning from Arkansas' 23-12 team, along with junior forward Adrio Bailey and sophomore forward Gabe Osabuohien. The Razorbacks have 10 newcomers.

"It's an opportunity to see how we can put this team together a lot quicker," Anderson said. "There's talent, no question about that.

"Let's see if we can get these guys all on the same page. I think that's going to be a big key."

The Razorbacks need to generate scoring from the perimeter to keep opponents from surrounding Gafford inside.

"That's going to be a key, because Daniel's going to be a focal point and obviously people are going to zero in on him," Anderson said. "So we've got to get guys that can stretch the defense."

Khalil Garland, a freshman guard from Little Rock Parkview, redshirted last season when he wasn't cleared to play because of an undisclosed medical condition. Anderson said Garland still hasn't been cleared to scrimmage, but he has taken part in drills during workouts.

"It's got to be like an accelerated program because of the youth," Anderson said. "We lost all of our guards. I think that's going to be a big, big key, because you're going to be as good as your guards."

Other newcomers are forwards Ethan Henderson and Reggie Chaney, and center Ibrahim Ali.

Anderson said all of the players had good summer workouts, but it's too early to say who will fill specific roles when the season starts.

"I can say stuff about some guys, but I've been fooled sometimes," he said. "In the summer, sometimes they have All-American stats.

"But we have guys that you know will score. Keyshawn's a scorer, Desi is a guy that can score, Isaiah and Reggie ... we've got multiple guys."

"You understand Daniel will be the face of our team," Anderson said. "But I think Daniel also has played enough basketball to know that getting other guys involved makes it better for him."