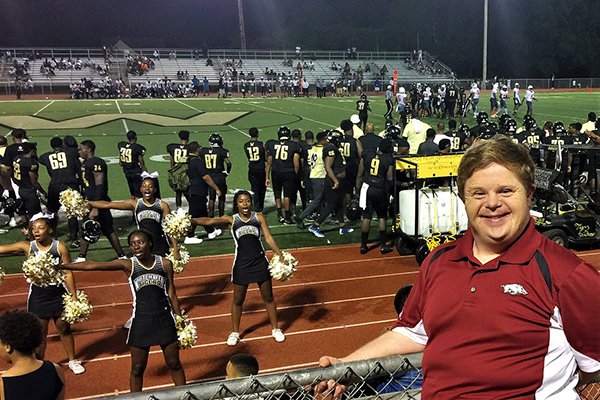 Arkansas fan Canaan Sandy, his mother and father traveled to Memphis to cheer on a trio of Arkansas targets.

University of Arkansas super fan Canaan Sandy is known to attend games of Razorbacks football, basketball and baseball prospects and cheer them on.

On Saturday, he along with his mother Ginger and father Dan traveled from Cave City to Memphis to root on Hog targets offensive lineman Melvin McBride and junior linebackers Martavius French and Bryson Eason of Memphis Whitehaven in a 35-0 victory over Fairley.

French, 6-2, 236 pounds, 4.7 seconds in the 40-yard dash, has eight scholarship offers from Arkansas, Tennessee, Ole Miss, Florida, Memphis and others. He knew of Canaan's love for the Hogs after following him on Twitter.

Sandy, who has Down syndrome, was one of three inductees into ESPN's 2013 Fan Hall of Fame. His passion for the Razorbacks and wanting to attend Saturday's game to show support for French and his teammates had an impact.

"That's great fan support," French said. "No other college that's interested in me has done that. That boosts Arkansas like a lot in my recruitment. That's very impressive that he came all the way from Arkansas to just come watch me play."

French recorded 53 tackles, 4 tackles for loss, a sack, a forced fumble and a recovered fumble as a sophomore for the Tigers who went 11-3 and made it to the Class 6A semifinals.

He visited Fayetteville in the spring of 2017 and was able to tour the facilities.

"Martavius is very athletic, he can run and break down in space and make plays," Lemming said. "He can play the run and pass very well."

He and Arkansas defensive coordinator John Chavis have communicated over the last few months.

"In the summer, I would call him like every Saturday when he's not busy and we would just talk on the phone," French said. "He would check on my family and all."

Chavis, who was the 2011 winner of the Broyles Award for the nation's top assistant coach, has produced 70 NFL Draft picks, including 15 first-rounders during his career.

After experiencing Canaan's enthusiasm for the Hogs, French plans to make his way back to Arkansas to check out the program again.

"Yes, for sure, especially after Saturday," French said. "It shows a lot of love because I didn't know fans were out there that serious about college recruits coming to their school, but when Canaan came out there he showed he really liked me and Bryson and I know he really loves Arkansas. That shows he looks up to me so I would love to be there with him."