State of the Hogs: Guidry getting ready for action 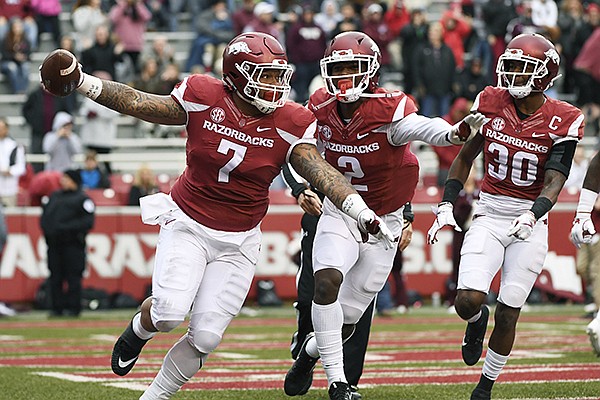 Arkansas defender Briston Guidry (7) celebrates with teammates McTelvin Agim (2) and Kevin Richardson (30) after recovering a fumble in the end zone for a touchdown against Mississippi State during the first half of an NCAA college football game Saturday, Nov. 18, 2017 in Fayetteville. (AP Photo/Michael Woods)

FAYETTEVILLE — There is no published depth chart for the Arkansas football team. There's been nothing like it from the spring. If you saw one in Hawgs Illustrated in the past week, it was a guess based on tiny bits of practice observation, both in the spring and in August.

There might be the first official depth chart of the Chad Morris era at Arkansas on Monday when the communications office releases game notes for the season opener against Eastern Illinois.

It could be a two-deep, or it might include all that are in the picture for playing time in that first game. But there are starting to be some ideas about how many might play at different positions, although not at quarterback.

Morris, the first-year head coach, has said it could be as many as “six or seven” in the rotation at wide receiver. It could be that as many as four play at tight end. There are glimpses of five different running backs with the top two units in practice.

Defensively, there have been glimpses of lineups two-deep, but there are hints that new defensive coordinator John Chavis is going to rotate way more than that.

“We are going to play five defensive tackles and at least six defensive ends,” Chavis said after practice Wednesday night.

There are clues that there could be as many as five of six in the picture at the strongside linebacker, the spot that subs with nickel and dime packages.

I'm fascinated by the possibilities in the front seven, especially at defensive tackle where Armon Watts and T. J. Smith have been with the ones, and McTelvin Agim and Jonathan Marshall seem to be with the twos.

There were clues about who might be that fifth defensive tackle when sophomore Briston Guidry was among the four to come to the interview room Wednesday. Guidry is trying to bounce back from a knee injury that has plagued him since high school at Archbishop Rummel in Kenner, La.

Guidry's reputation has always been that he's good for a few plays, but not for a full quarter. That might stem from the battle of conditioning with that bad wheel. It might finally be healed.

The other part of Guidry's reputation is noteworthy. He was a consensus four-star player by the recruiting services and a three-year starter at Rummel. No one had ever done that at defensive tackle there, according to his high school coach.

Guidry started August camp wearing a caution jersey, meaning he wasn't cleared for full contact. That changed by last weekend when he scrimmaged and drew praise from his coaches. It's significant that he was brought to the interview room.

“It feels great to be back,” Guidry said. “I think we've got a great group of guys.”

How did he play Saturday?

“I'm probably a little behind as far as my conditioning, but I've been in my playbook and I know what to do,” he said. “I thought I did good. I got a lot of reps and I know I just have to get in better condition.”

The dialogue about what's going on with the defense under Chavis is the same for the defensive tackles as it has been for everyone else who has come to the interview room in the last six months. They like the blitzing.

“I can tell you what we do is different,” Guidry said. “It's not like anything we've done in my first two years. The linebackers are sailing past us (in the defensive line). They are playing down hill.

“Of course, we are attacking up front, too. We've got our responsibilities and assignments. But it's going to be attacking, blitzing.”

There wasn't any doubting that from listening to weakside linebacker Dre Greenlaw on Morris' radio show Wednesday night. He'd never done anything like what was given to him by Chief.

“Really? I asked him, 'Do I get to drop a few times and go for an interception.' It's what he's about, calling blitzes.”

Guidry said, “It's pressure. I knew that's what he did. I was being recruited by him when he was at LSU, so I knew what he did. But it's still amazing to be doing it. What he wants us to do is penetrate the line and get off the ball. It is freedom to get in the backfield.”

What does that mean?

There was a mention of Agim, converted to defensive tackle from end. Agim's ability fits what Chavis wants to call.

“Sosa is a heckuva player and he's transitioned to tackle very well,” Guidry said of Agim. “He can use his quickness and ability with what we are doing.”

What the Hogs are doing at quarterback is still not clear. I saw five take snaps in the open part of practice Wednesday, the first 20 minutes. There have not been any clues, not by Morris or by offensive coordinator Joe Craddock.

“We are still looking for someone who is consistent,” Craddock said. “There's been good and bad from everyone. We just don't know who is going out there for that first snap of the game.”

It could be that several play. That may not be clear until the first game. I suspect there to be some surprises before it's all done.

There aren't going to be surprises about how many play on defense. The Hogs are getting a bunch ready for the opener. The good news is that it appears to be one of those getting ready is Briston Guidry.