Adopted Greenlaw finds home after youth on the move 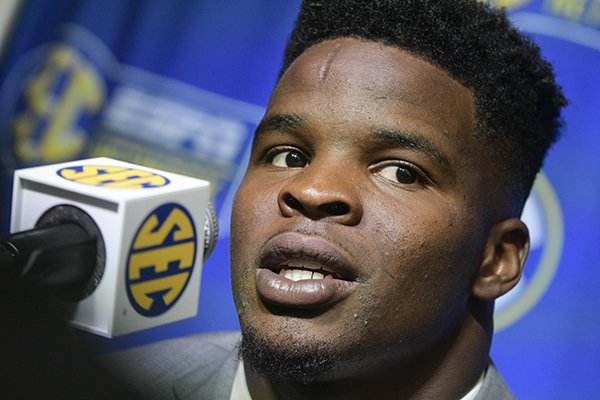 FAYETTEVILLE — Brian and Nanci Early weren’t thinking about the football potential for the 14-year-old kid they were preparing to invite into their home.

They just wanted to see little Dre Greenlaw get a shot at a stable family life after he had spent six years as a ward of the state, bouncing from foster homes to boy’s homes.

Fate put Greenlaw in Fayetteville while Brian Early was serving as the defensive coordinator at Fayetteville High School from 2009-2012.

Good fortune seems to have linked Greenlaw to the Earlys and their daughters, AJ and Camryn. And the bond is now official.

After nearly seven years of calling Dre their son, Brian and Nanci officially adopted Greenlaw in July, shortly after he turned 21 on May 25 and just a few days before Greenlaw represented the University of Arkansas at SEC Media Days in Atlanta on July 17.

Brian Early will start his fifth season as defensive line coach at Arkansas State on Saturday against Southeast Missouri State as the official father of Greenlaw.

“Even though it wasn’t legal until July, he’s always been my son,” Early said. “He’s felt the same way. We’re Mom and Dad to him. It’s a pretty special relationship.”

Greenlaw, the most experienced Razorback on the 2018 roster with 30 career starters, will open his senior season at home on Saturday against Eastern Illinois. Greenlaw said he knew he could have been adopted at age 14 but that there were benefits through the Department of Human Services (DHS) by holding off until he turned 21.

“When I turned 21, I had the choice to make between if I wanted to just become my own man, which I am, and still stay in the DHS system, or be with the people that took me in and they care for me and show that they love me and I’ve got the same respect back for," Greenlaw said. "I mean, paper or no paper, they’re still my parents.”

The Earlys felt the same way.

“When Dre started living with us when he was 13 or 14, he had no way of knowing he was going to be a scholarship Division I athlete,” Brian Early said. “So there were benefits to keep him in the DHS system, where he would get his tuition paid as long as he went to school in the state of Arkansas.

“There were insurance benefits as well, driver’s insurance and health insurance and things like that. I told Dre then that, ‘Hey, I’m in this thing for life. You’re my son. We’ll adopt you right now if this is what you want to do.’”

The Earlys thought at first that Brian might just serve as a mentor to young Dre, taking him out to eat on the weekends and going to church. But the family took him in during the winter of Greenlaw’s ninth grade year, when the boy’s home in which he was living was preparing to close and send him away again, to a boy’s ranch in Alma.

“I thought this may be a little uncomfortable. It was never. He just fits our family so incredibly. His personality is like ours. It’s really funny. I would have had to try really hard not to adore him. I think everybody who meets him is like, ‘Man, what a great kid.’ I don’t know how we got so lucky to have him.”

Greenlaw said he is “blessed beyond measure” to have found a forever family.

“I’m blessed more than people realize because you only hear what I get to tell you,” Greenlaw told the Arkansas Democrat-Gazette in Atlanta at SEC Media Days.

“It’s made me where I am today. Now, would I have liked to have been with my real parents throughout the whole sequence? Yeah, if I had been with my mom it would have made things a lot better. But I know I wouldn’t be as strong of a man as I am today.”

Greenlaw doesn’t go into great detail to describe his early family life in Conway. But his background included drug use in the family, which led to prison for one family member, and an unwillingness of others to take him in.

He said he tries to draw strength from what he’s been through.

“I just use that past and the experience and those feelings that I have … you still remember those long nights that you cried alone by yourself when you didn’t have nothing to eat and all that, you remember all that,” he said. “Nobody went through that but you. So whenever things start getting hard for me and I don’t see things clearly right, I just look at what I’ve been through.

“You can’t do nothing but smile because you’ve come so far … it’s got to be God. I’m blessed. I’m going to try to use the gifts that God gave me and use them to the best of my ability.”

Brian Early gave Greenlaw his first college scholarship offer. It came moments after Early hung up the phone with incoming Red Wolves Coach Blake Anderson in late 2013. Early had spent the 2013 season as a low-paid quality control assistant for Bret Bielema at Arkansas, but Anderson was offering him an on-field position.

Greenlaw was at one time committed to Arkansas State, but he had long held designs to play for the Razorbacks.

“For a while I did want to go to Jonesboro, go to Arkansas State and be with somebody that I knew that cared for me,” Greenlaw said. “But God placed Fayetteville in my heart for a reason. This has been home. I stay here more than I stay in Conway. I don’t go to my biological home very much just because it’s not the best situation for me. Fayetteville is definitely my home.”

Greenlaw said Early has been supportive of his decisions since joining the family.

“I couldn’t ask for anyone else to be there more than he was,” he said. “It was just that he was there for me, it was the example that he was showing and it was rubbing off on me. It allowed me to want better for myself. He definitely helped me in ways I couldn’t imagine just to find out who I was as a man and help me become that man.”

Greenlaw earned Freshman All-America honors in 2015 by the Football Writers Association of America and The Sporting News. He racked up 95 tackles while making 11 starts to rank fifth among all FBS freshmen. He made his first game-changing play, a strip-sack of LSU quarterback Brandon Harris that produced an Arkansas touchdown in the Hogs’ 31-14 upset on Nov. 14.

Greenlaw’s abilty to draw on his past experiences for strength was tested during a trying sophomore season in 2016 in which he suffered a broken foot early in a 49-30 loss to Alabama and the Razorbacks started a revolving door at defensive coordinator and with schemes. He returned for the Belk Bowl, a crushing 35-24 loss to Virginia Tech, but injured his other foot.

He also suffered a quad muscle injury as the Razorbacks were shifting to a 3-4 defense under new coordinator Paul Rhoads.

“When we got in the 3-4 defense, I didn’t practice in it until two weeks before the game,” Greenlaw said. “So I mean, I missed my whole spring with my foot. … I had pulled my quad, which a lot of people didn’t know about it. I had this and the foot back to back.”

The Razorbacks dropped to 4-8 in 2017 even as Greenlaw racked up 103 tackles to join teammate and fellow linebacker De’Jon Harris (115) in the 100-tackle club.

Now the Razorbacks are back in a base 4-3 under veteran coordinator John Chavis and Greenlaw is stoked.

“Oh, [2017] was a blur. It was hell. But definitely out of everything negative and everything that was happening, there was a bright side to it because I got another chance to play, to show what I can do. Most importantly, I’ve got the best defensive coordinator.”

“I think this young man gets it,” Morris said. “He understands. He approaches every day with an attitude of gratitude. He’s appreciative of what he gets and the people that have helped him along the way and where he is now and where he’s been in life.

“He’s very appreciate, and he’s one of the hardest workers. I think you could pull our Catapult numbers and see that this guy, when he steps on the field, he knows one speed and that’s everything he has.”

Chavis said he’s learned a good bit of Greenlaw’s back story in the short time he’s been at Arkansas.

The Earlys have been well aware of that since bringing him into the fold on Dec. 23, 2011, after many hours of foster care lessons and mountains of paper work.

“We said, ‘Dre, we’ve never done this before, and we’re not doing this just because we want to be foster parents,” Nanci Early said. “So I said, ‘If you come live with us I just need you to understand you’re part of our family and I don’t know how to do it any other way.’

“He seemed excited about that, like he didn’t want to just live there. He wanted to be part of the family.”

Brian Early knew that Greenlaw would have been a huge impact player at Arkansas State, but he didn’t try to force him into going to Jonesboro.

“We wanted to let him make his own decision,” he said. “All of his life he’s had decisions made for him and he’s had things taken from him. We thought, let’s give him this, let him make the decision and I know it was tough for him to do.

“That’s where he always dreamed of playing. Obviously on National Signing Day we didn’t get the signature we wanted, but hey, I wouldn’t trade it for the one that we got in July, you know what I mean?”