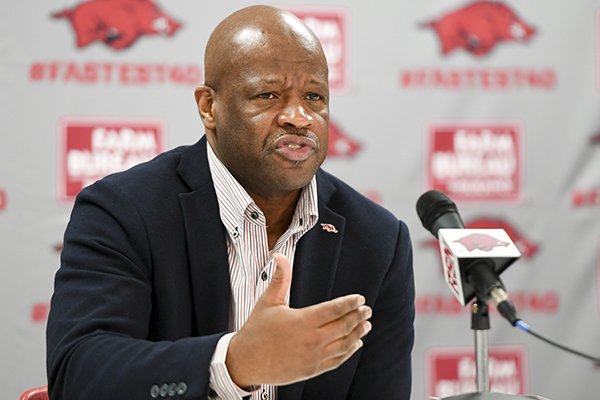 – We have just been handed schedules as we wait on Mike to arrive. A notable addition: Georgia Tech on Dec. 19. The schools have played just five times and Georgia Tech leads the series 4-1. They last played Nov. 26, 2015 in Brooklyn. Tech won that game 83-73 as part of the NIT Tip-Off.

– Anderson: "It's a pretty challenging schedule." Anderson said you can't just look at a team's name and assume they're not very competitive. He mentioned UC Davis by name.

– The newness and freshness of a new team is exciting, Anderson said. Arkansas has a chance to be an exciting team with Daniel Gafford as the centerpiece. Anderson said Jalen Harris got some seasoning going against guards like Daryl Macon and Jaylen Barford.

– Eight of Arkansas' opponents made the NCAA Tournament last season, he says.

– Georgia Tech will be a home-and-home series. Anderson says Georgia Tech is a team that needed a game, and he thinks it will shake out to be a couple of very good games.

– "We have to expedite some things in the learning process." At the end of the day, he likes how the guys compete in individual and team workouts. Conditioning will start next week and practice starts in October.

– "When you say Texas and Arkansas, you're saying a mouthful. ... It's a big, big challenge right off the bat."

– No change in Khalil Garland's status. Anderson hopes to have a clear picture in a month or so.

– Indiana is a very good basketball team. Archie Miller is a great coach and they've got a great recruiting class coming in, which features Romeo Langford and a handful of 4-star players. Miller runs a good program, Anderson said. Arkansas also played a home-and-home with Dayton when Miller coached the Flyers.

– Arkansas is in the process of finding a new head strength and conditioning coach. Adam Petway has taken a similar position with the Philadelphia 76ers. "I thought Adam did a great, great job." It's important for Arkansas to take what Adam did and continue it, he said.

– Arkansas has five Saturday home games in conference play (LSU, Mississippi State, Texas A&M, Ole Miss, Alabama) and Anderson likes that. It allows the fans, who show up and show out, to come in and make a difference.

– Anderson said there haven't been any discussions about playing in-state schools to this point.