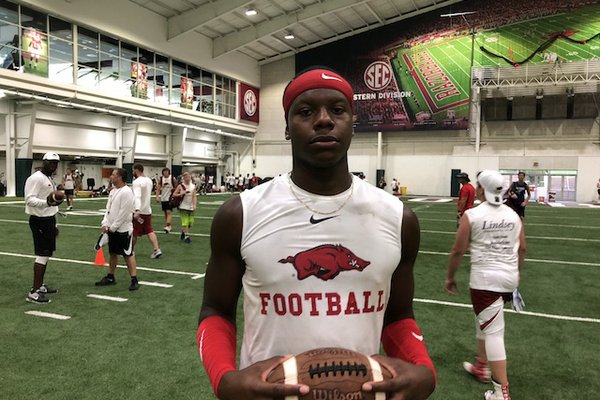 Arkansas quarterback pledge KJ Jefferson was able to get to know many of his future teammates along with fellow commitment TQ Jackson during his official visit this weekend.

“I had a really good time on my official visit,” Jefferson said. “Me, being committed to Arkansas, they really showed me a good time. It was a great atmosphere, the players were great, it was a great feeling.”

Jefferson, 6-3, 210 pounds, of Sardis (Miss.) North Panola, picked the Razorbacks over more than 20 scholarship offers from Texas A&M, Ole Miss, Missouri, Mississippi State, Georgia, Kentucky, North Carolina State, Indiana and others in May. ESPN rates him a 4-star prospect and the No. 18 dual-threat quarterback in the nation.

“My relationship with TQ is great, all the commits are in a group chat and all of us just talk and bond,” Jefferson said. “TQ and I bonded the whole visit.”

He completed 166 of 275 passes for 3,180 yards and 37 touchdowns with 8 interceptions while rushing 115 times for 916 yards and 7 touchdowns this season. Jefferson was able to spend more time with offensive coordinator Joe Craddock.

“Spending more time with Craddock was good since he’s my position coach,” he said. “Having a really tight bond with coach Craddock really amazes me.”

He was working on uncommitted junior college offensive linemen Myron Cunningham and Chibueze Nwanna during the trip.

Jefferson is confident the highly regarded recruiting class will get the Hogs going in the right direction.

“I think our recruiting class will really get things off the ground because of the athletes we have in,” he said. “All different areas. We can do what (Coach) Chad Morris needs us to do, run his offense, do what he needs us to do on and off the field, so I feel like it’s a very good recruiting class coming to Arkansas.”

He looks forward to competing once he arrives in Fayetteville.

“I’m just going to take that situation one day at a time,” Jefferson said. “When I get up here I’m just going to have fun and compete. Soak up all the knowledge from the older guys and do my best to compete. I’ll be working on my footwork for the college level and mainly just having fun before I get here."