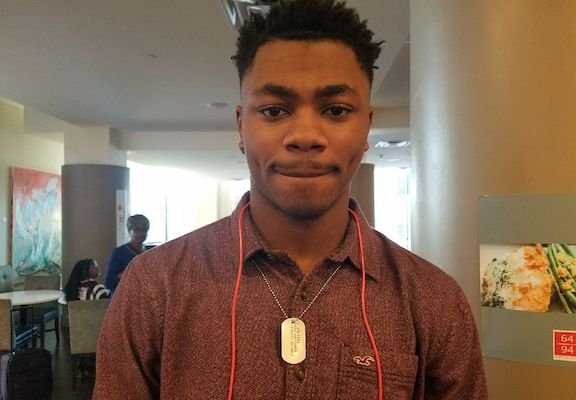 FAYETTEVILLE — Arkansas wide receiver pledge TQ Jackson is a smart young man as evidenced by his actions on his official visit to Fayetteville this weekend.

While he was interested in seeing more of the campus and visiting with the coaches, Jackson was more intent on buddying up to quarterback KJ Jefferson and all of the offensive linemen that were visiting.

“I think my hands are my best strength,” Jackson said. “I’ve got speed for my size. I’m working more on route running. That’s what will separate me in the SEC.”

“I was impressed with the coaches,” Jackson said. “They made it feel like more like a family. I got real close with KJ.”

He had not been to Fayetteville since this spring.

“The last time I was here the field wasn’t done. I got to see that,” Jackson said. “The food was obviously good.”

He was also impressed with the Razorbacks’ basketball game, although they lost 78-77 to Western Kentucky.

“It was a great game,” Jackson said. "They got a good big man (Daniel Gafford). He’s real good. It was a good atmosphere. You know the fans doing the chant.”

“We just went out and had some fun,” Jackson said. “He showed me a good time. I got to hang out with him and Rakeem Boyd.”