Searcy's Drew Vest ready to be a Hog 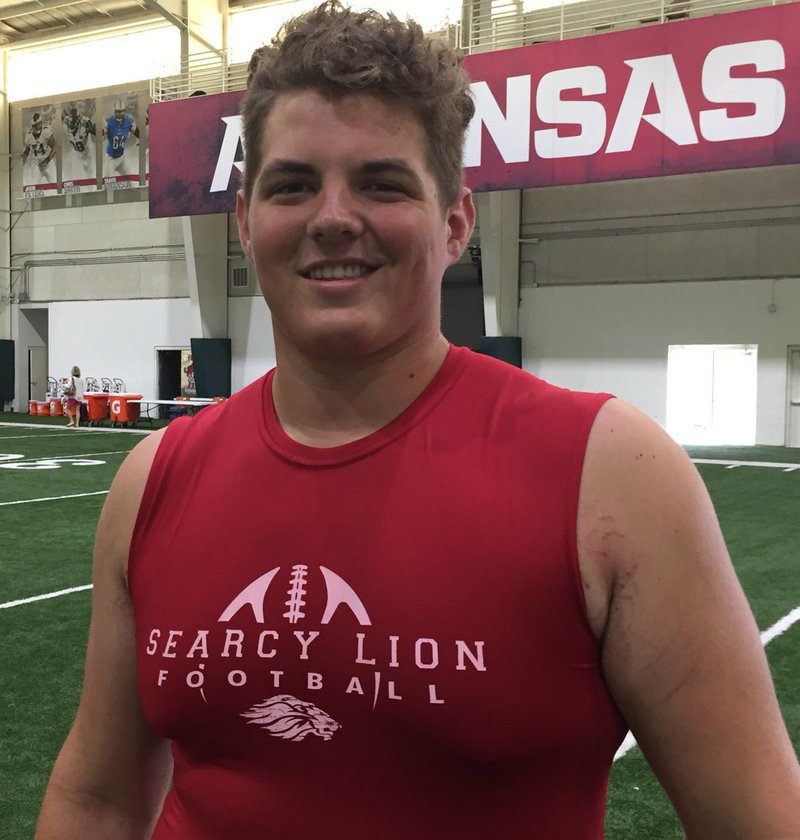 FAYETTEVILLE — Searcy offensive lineman Andrew Vest will fulfill his dream of becoming an Arkansas Razorback when he enrolls in January and gets started with offseason workouts.

"You get to get in here, get your body right, and start to do stuff that other guys don't get to do for another six months,” Vest said. “I'll have a huge leg up when it comes to the physical side and the mental side, as far as getting in here and learning the plays and being able to go through spring ball.”

Vest, 6-5, 293 pounds, was committed to Central Arkansas, but decided to pursue the opportunity to be a Hog as a preferred walk-on. He had other scholarship offers from Air Force, Yale, Dartmouth, Lamar, Tennessee-Martin, South Alabama and Houston Baptist.

The weekend trip to Arkansas allowed him to get to know more about life as a student.

“It was great to see the ins and outs of what I didn't see before, go through the different meetings with my professors that I'll be with in my different courses of study,” Vest said. “Just the side of things that you never really see on an unofficial visit.”

“We used to duke it out in high school ball and kind of ran the camp circuit together, so to get back with him and bring back some old times is really good,” Vest said.

Vest, who has a 3.7 grade point average, believes his smarts in the classroom translates to the field.

"I value myself as a really smart football player, and I think I have a high football IQ in terms of knowing everything that's going on on the field,” he said. “I know that I can definitely get better in the weight room and get faster feet.”

His versatility could see him at any spot on the line after talking to offensive line coach Dustin Fry.

"As of right now, I'm probably going to play inside, whether it's guard or center,” Vest said. “He told me not to rule out playing tackle, but right now they want me at guard and center."

"I think he really is set on narrowing it down to Harding or here,” Vest said. “I think he wants to weigh all of his options because he likes Harding a lot, and I think they've offered him a pretty good scholarship."