State of the Hogs: Catching up with First Lady of Arkansas football 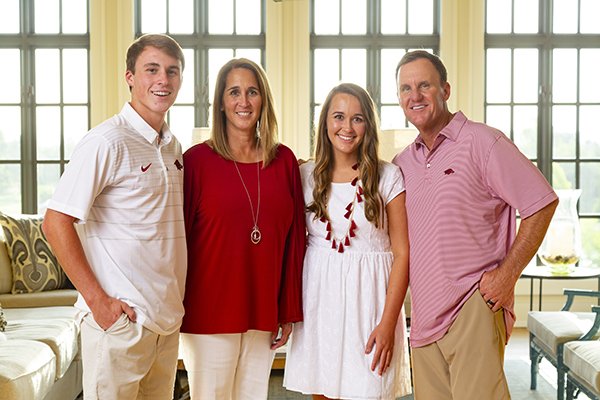 The Morris Family (from left): Chandler, Paula, Mackenzie and Chad.

It's not clear who recruited whom in the marriage. Paula Morris said the start of her relationship with husband Chad Morris, the Arkansas football coach, was something both resisted at the outset.

“It started out as a date between two people with a bad attitude,” Paula said of the blind date during their college days at Texas A&M.

“I think I got it close enough,” she now laughs.

What they do agree on is that the relationship became tight as they began to visit outside of a classroom over the course of the next semester.

“We had a class in the same building,” she said. “Chad would see me and began to talk. He said he did it just to keep from being rude. He said he stopped to talk out of kindness.”

How the romance blossomed isn't clear because Paula doesn't remember the next date.

“I really don't,” she said. “I just know that it started from talking to each other every other day heading to class. I don't remember another date.”

What she will tell you is that it's almost the same thing in the way football recruiting goes. You build on the conversations and the relationship grows stronger. She can tell you plenty about the way her husband and staff recruits for the Razorbacks because she is often along for the ride. Morris and staff have recruited one of the nation's best classes this year.

“Once Chad got into (coaching) college, I was involved,” she said. “I really didn't know what recruiting involved, what was normal. But I found out. Chad was on the phone and often. He'd say, 'Here, talk to Miss Paula.' I think that showed the players and their families who he is.”

So when families arrived on their visits, often they were quick to look for Miss Paula. Actually, they already knew her because of FaceTime.

“Wives are very involved on official visits,” Paula said. “There are the dinners, then time back at our home. I'm hanging out with the parents.

“It's a tough decision for moms to let their sons go away to college. Very tough.

Paula wants parents to call her when questions come up.

“I make a goody bag for them when they come to campus to leave their son,” she said. “It's got Kleenex. It's got candy and comfort food.”

And, there is a phone number.

“Mine,” she said. “Now, I can't help with football questions, but there are some things that I can help them find out. I want them to know they can call me and I'll get the questions answered. Things like how to get their laundry done. And, if I can't answer it, I'll get someone who can.”

The relationships are for a lifetime.

“I can tell you that it doesn't change, you build the relationship and most of them are still there,” she said. “Like Deshaun Watson, our quarterback at Clemson. Chad started recruiting Deshaun in the ninth grade and we still stay in contact, keep up with what's going on with our families.

“That's what we do as wives. Our role is important in recruiting. The (recruits) need to see us as real live people.”

Chad Morris constantly lays it out there that football is what he does for a living, but it's “not who I am.” Paula knows that's how players get to know him.

“I hear him on the phone with recruits,” she said. “There is football talk. He'll ask them about the last game or a practice, but it quickly gets away from football. I'd say most of his phone talks are not about football.

“I've said this all the time, that when I see a player commit really quickly some place – and Chad says the same thing – that I worry about it. There wasn't time enough to build that relationship. The decision should be built on that relationship.”

Watching a football game together will test the relationship. That's what it sounded like as Paula described watching son Chandler play quarterback for Highland Park High School this past season. The Scots are 14-0 headed into their game against Denton Ryan (14-0) in the state semifinals at noon Saturday in AT&T Stadium.

“It's been very interesting the last year,” Paula said. “We've been in the stands at a football game to watch our son play before, but it's different this year.

“Before it might be a JV game, with the freshman team, or where if you lose, it's probably OK. It was just playing for fun. Now it's for real.”

Paula said they both are having difficulty listening to the other.

“If you ask him, I talk too much during the games,” she said. “I think he talks too much.

“Chad doesn't yell, but he says things that make me nervous. He knows what's going on and he just kind of thinks through it out loud.

“For example, he's talking about a play in a game and just says out loud, 'That's Cover Two, whatever you do, don't throw it in the flat.' Chandler threw it in the flat and Chad said, 'That should be a pick six, but he dropped it.' It's things like that.”

Paula keeps busy with Chandler's games, but there's plenty to do around the house, too. It's more like a zoo than a family home.

“Not counting horses and cows, there are two golden retrievers - three when Mackenzie's dog is home and that's now because she's in finals,” Paula said, referencing the Morris' daughter who is a student at Texas A&M. “There is a 10-year-old Quaker parrot and a 12-year old red-eared slider turtle that is my son's.

“Anytime we leave town, it's a chore. The oldest golden is 12 and we haven't boarded her in years. We have a list of people we trust with the animals and the house.”

Paula has been around horses most of her life. Her parents got her first horse “when I was eight or nine. That horse was a month shy of 34 when we lost him. My mom took care of her a lot at the end. I'd say the last five or six years no one could get on him but me.”

“All I did was pleasure ride,” she said. “It was therapeutic.”

There wasn't a horse around for a few years.

“I told Chad that I wanted to get a horse again when Chandler started driving and that was last year,” she said. “So I started looking. One night after that I saw Chad on his computer looking at horses.

“I asked him what he was doing. He said, 'You aren't going to ride by yourself.' So one turned into two. So now I am taking care of two horses.”

That leads into one of their several charities, Horses for Healing of Northwest Arkansas. The horses are used by children with special needs for therapeutic riding.