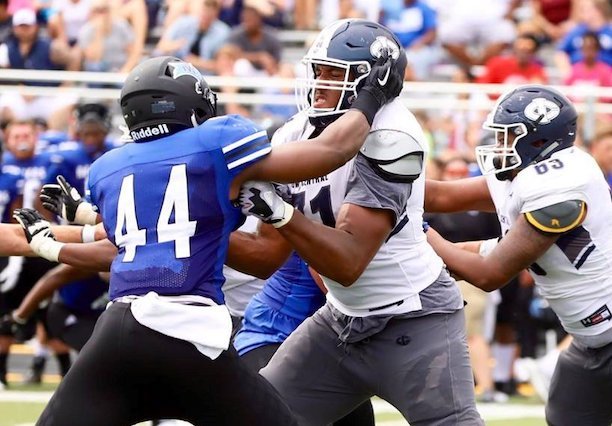 The University of Arkansas is expected to sign at least 19 football prospects today, the first day of the early signing period that runs until Friday.

The Hogs could add one or two others to the list. Cornerback Greg Brooks will announce his college decision today from among Arkansas, Mississippi State, Kansas State, Kansas and Southern Mississippi at a 1 p.m. ceremony.

East Mississippi Community College linebacker Sci Martin, 6-4, 230, officially visited Arkansas on Dec. 7-9 and could ink with the Hogs today. He played in five games at LSU as a freshman before going to junior college.

The offensive line was a major priority for the class, and the Razorbacks expect to sign four high school and two junior college prospects.

"I'm just really excited and looking forward to playing at Arkansas and turning the program around," Cunningham said.

He chose the Hogs over scholarship offers from Oklahoma, Nebraska, Pittsburgh, Indiana, Texas, Mississippi State, Missouri, Rutgers and others.

Chibueze Nwanna, 6-8, 315, of Lackawanna College in Scranton, Pa., chose the Razorbacks over scholarship offers from Maryland, Louisville, Massachusetts, Cincinnati, San Diego State, East Carolina and Southern Mississippi. He plans to sign with the Hogs from his home in Maryland.

Cunningham and Nwanna intend to enroll in January.

The receivers class is headed up by midterm enrollee Trey Knox, 6-4, 210, of Murfreesboro (Tenn.) Blackman. He's an ESPN four-star prospect who picked the Hogs over scholarship offers from schools such as Tennessee, Auburn, Ohio State and Clemson.

TQ Jackson, 6-3, 180, of Jefferson, Texas, will sign with the Hogs during a 9 a.m. ceremony. He had scholarship offers from TCU, Baylor, Arizona, Missouri, Minnesota, Arkansas State University, Houston, SMU, Texas Tech and others. Rivals rates him a four-star prospect.

"Wednesday is gonna be a day I used to dream about ... ready to officially be a Hog," Jackson said. "I'm finally living this moment."

Shamar Nash, 6-2, 190, of IMG Academy in Bradenton, Fla., had offers from Arkansas, Auburn, Missouri, Florida and others. He said today is the biggest day of his life.

"I worked my butt off to get this opportunity," said Nash, who's rated a four-star prospect by national recruiting analyst Tom Lemming. "It was nothing but a blessing from God to be in this position. The odds of me getting this chance were always against me, so I'm just simply blessed."

ESPN four-star quarterback KJ Jefferson, 6-3, 210, of North Panola High School in Sardis, Miss., is expected to be the lone signal caller to sign with the Hogs today. His ceremony is slated for 11:30 a.m.

More than 30 years after his father signed with Arkansas, defensive end Zach Williams, 6-4, 230, 4.57 in the 40, of Joe T. Robinson will do the same at a noon ceremony at the school today.

His father Rickey inked with the Hogs in 1984 and went on to be an All-SWC linebacker in 1987.

"I'm excited to go to the next level and meet my new teammates and coaches," said Williams, who will enroll in January. "It'll be a great experience, and me signing just takes me one step closer to my goals."

Defensive end Eric Gregory, 6-3, 270, 4.7 in the 40, of IMG Academy in Bradenton will sign with the Hogs over scholarship offers from Auburn, Tennessee, Ole Miss, Mississippi State, LSU and others.

He and Williams are ESPN four-star recruits.

He chose the Hogs over Alabama, Florida State, Oregon, Stanford, Virginia, Vanderbilt and others.

Warren defensive tackle Marcus Miller, 6-4, 300, will ink with the Hogs early this morning. He picked the Razorbacks over Tennessee, Missouri and Memphis.

Outside linebacker Zach Zimos, 6-4, 215, 4.50 in the 40, of Richmond (Texas) Fort Bend Travis will sign today after considering offers from Missouri, Texas Tech, California, Purdue, Boise State and others. Rivals rates him a four-star recruit.

"It's a big-time thing down here because going to a small school, most people don't look for talent in these areas," Chavis said. "It's the next big step for me as an athlete to go to the next level, and it's just a blessing. I'll be the first college football player out of my family, so it's just exciting."

Cornerback Adonis Otey, 6-0, 170, of Blackman High School in Murfreesboro, Tenn., has stated he plans to visit other schools in January. Cornerback Devin Bush, 6-0, 187, of New Orleans Edna Karr hasn't said why he plans to wait until February to sign.