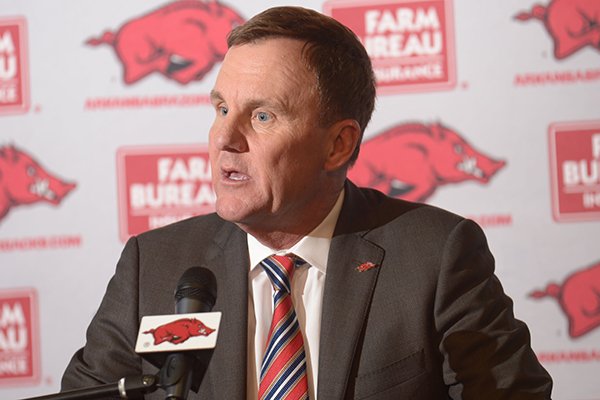 Arkansas coach Chad Morris speaks Wednesday, Dec. 19, 2018, during a press conference to announce the players who signed to play for Arkansas.

• He says there will be eight players enroll in January and go through spring practice.

• Drawing on a short time to recruit prior to the early period last year, Morris indicates the time to build relationships paid off this year. He said last year they were trying to build a year worth of relationships in 14 days.

• Morris said Arkansas signed 10 "immediate-impact players" on both sides of the ball.

• "If we can just get them on campus, we'll show them," Morris said of recruiting.

• Morris calls cornerback Greg Brooks "a fabulous football player." Brooks flipped from Mississippi State to Arkansas about an hour ago.

• Morris called Rison defensive back Malik Chavis "the face of our class." Chavis was Arkansas' first commit for the class.

• One of the things Morris said the staff addressed was the desire to be a Razorback. "We want it to be a big deal when they put on that helmet...and we got that."

• Morris calls defensive end Mataio Soli "absolutely dynamic." He says Arkansas would have recruited him even if his father (Junior Soli) was not a former Arkansas player.

• Morris says linebacker Zach Zimos has an opportunity to be an effective pass rusher.

• Morris says offensive coordinator Joe Craddock "did a tremendous job recruiting" KJ Jefferson, the four-star quarterback from Sardis, Miss. Morris calls Jefferson "the guy and all we needed was his word."

• Morris says Arkansas had to address the need for older guys to play offensive line. The Razorbacks have two JUCO linemen transferring in, Myron Cunningham and Chibueze Nwanna.

• Morris has talked a lot about Arkansas' ability to recruit in its "footprint," which he says includes Texas, Tulsa and Memphis, in addition to the state of Arkansas. The Razorbacks have five players committed from Texas, two from Memphis and two from Tulsa. There are five players committed from the state of Arkansas. Not all will sign in the early period.

• On another recent commit, Ricky Stromberg, Morris says he has changed his body drastically in the past year. Coaches see him playing center.

• Morris says Arkansas still is looking at possibly bringing in an older quarterback, such as a graduate transfer from another Division-I program.

• Morris said Arkansas did not have enough competition in practice in 2018. He thinks this class will change that in future years.

• Morris says it is "really uncommon" to sign two players, Enoch Jackson and Taurean Carter, who have played side-by-side in high school. The defensive linemen played together at Legacy High School in Mansfield, Texas.

• Morris says he hopes to never have to sign six offensive linemen in a single class again. Arkansas' lack of players there made it a necessity this year. It was the same way on the defensive line, Morris said, where the Razorbacks signed seven players.

• On multiple occasions, Morris has noted that Arkansas "is not done yet" in recruiting this class. The Razorbacks will sign up to nine more players in February.

• Morris says he likes the early signing period now that he has gone through a full year at one school.

• Morris says in the 2020 class, Arkansas will sign between 19 and 23 players, based on his best guess at this time.

• On the potential of a graduate transfer QB, Morris says he is OK if the player has to wait until the summer to enroll. "I anticipate bringing someone in, whether that be January or early summer," he said.

• Morris says there is a chance Arkansas will sign more players during the early period, which ends Friday.

• Based on the intel he has now, Morris says he does not think any underclassmen will declare for the NFL Draft his year.

• Asked why some players are waiting until February to sign, Morris says it is a combination of reasons, including schools being out of class already in some places for Christmas, and that many grew up watching players sign on the February date.

• Morris says several of the signees today "never wavered" during the Razorbacks' 2-10 season. "If anything, the more adversity we faced, the stronger they got (in their commitment)," Morris said. He added that several of the players had formed close-knit relationships through social media.

• Morris says Arkansas will look to sign one or two linebackers, one or two defensive backs and potentially another defensive end on defense, and a running back, a receiver, a tight end and a quarterback on offense in February.

• Asked a follow-up question about underclassmen returning, Morris reiterates linebacker De'Jon Harris will return. Morris says he has had conversations with cornerback Ryan Pulley and defensive lineman McTelvin Agim. (Reading between the lines it appears both are leaning toward returning, but have not made a final decision.)

• On Texas recruiting, Morris says the built-in relationships for the coaching staff in the state are valuable. He says the best Arkansas teams always had a strong mixture of Texans on the roster.

• Morris was asked about his son, Chandler, starting in Saturday's state championship game for Highland Park. "He would be the first to tell you about the entire team, but as a dad I'll be the one doubled over in the stands...because it's pretty nerve-wrecking as a parent," he said.

• The news conference has ended.