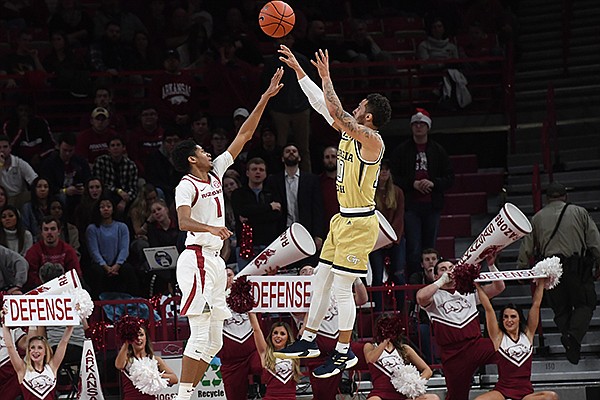 FAYETTEVILLE — From the left wing, Jose Alvarado circled to the top of the key and let fly a 3-pointer over the outstretched right hand of Reggie Chaney.

His fifth 3-point try of the night - and second make - put visiting Georgia Tech - fresh off a loss to Gardner Webb on Monday night - ahead 59-57 with just under four minutes to play Wednesday. Two-and-a-half minutes later, Alvarado picked up a long rebound off an Isaiah Joe miss and raced the other way.

Once in the lane, he shielded the ball from forward Daniel Gafford and kissed it off the glass for his final bucket of the night, which put the Yellow Jackets up 63-60. Alvarado, standing 6-foot tall, finished the night with a game-high 20 points on 9-of-15 shooting and and had nine rebounds in Georgia Tech's 69-65 win.

He did so without ever coming out of the game.

"I thought Jose’s leadership, his quarterbacking, from the first minute of the game to the very last minute was outstanding," Georgia Tech coach Josh Pastner said. "I don’t know how many guys have come in here as the point guard and played 40 minutes and won a game.

"As the point guard against their press, in all the years and all the Arkansas teams, a point guard has started and played all 40 minutes and been able to win a game like that... That’s not easy to do."

Jarrell Martin, the former LSU forward, was the last opposing player to play all 40 minutes in a win in Bud Walton Arena. Martin finished with 27 points and eight rebounds in the Tigers' win in March 2015. No opposing guard has done that in Mike Anderson's tenure at Arkansas.

Martin didn't control tempo like Alvarado did Wednesday, which marked the third consecutive game the Razorbacks failed to reach 80 points - roughly their season average - and play at a pace Anderson prefers. The sophomore burned Arkansas inside the arc in the first half, hitting 5-of-7 for 10 points, and buried it in the second half with a pair of 3-pointers.

"I thought he showed some grit," Anderson said of Alvarado. "He kind of controlled the game for them and I thought he settled them down when they got rattled. He made some big plays for them. He's a good player."

Alvarado's teammates told him to simply keep playing, so he did, reaching the 20-point plateau for the second time this season.

Arkansas guard Mason Jones, who scored a team-high 17 points on 5-of-15 shooting, gave Alvarado credit when it was due.

"He controlled the tempo of the game," Jones said. "He played the whole game, we’re pressing the whole game, so he had the ball in his hand the whole time, so for him to play that good and not get tired and for the coach to trust him for 40 minutes is impressive. He did have a good game."

Far from a juggernaut offensively in the words of Pastner, Alvarado also lended a hand on the defensive end with a pair of steals. His second of the game came during a crucial sequence for the Razorbacks with just more than 11 minutes to play.

After knocking down his first 3-pointer of the night, which he celebrated with a great deal of flair, Alvarado flashed quick hands and deflected a Desi Sills pass high in the air. After securing the ball, he kickstarted a Georgia Tech break, which ended with a Khalid Moore layup as part of the Yellow Jackets' 10-0 run to take a 48-43 lead.

"We hang our hat on defense. That’s what we do," Pastner said. "When we defend at a high level we’re a very good basketball team."