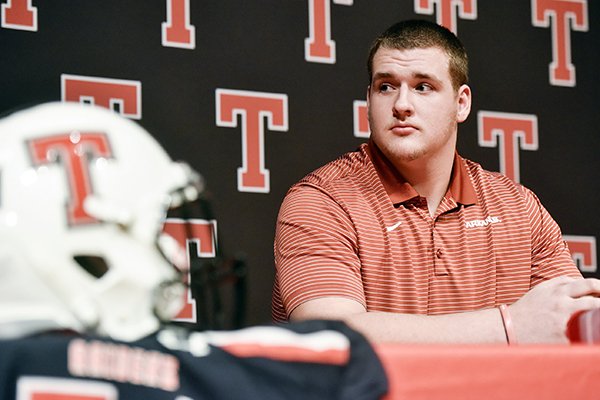 Recruiting rankings won't be final until after the Feb. 6 signing day, but the University of Arkansas appears to be well on the way to a very good class after signing 20 prospects Wednesday, the first day of the early signing period.

"I have Arkansas ranked No. 15 in the country right now," Lemming said. "Despite having a bad year on the field, they obviously have a real good recruiting staff. Better than what I've seen in years."

He rates Knox a 4-star plus prospect, Nash a 4-star prospect and Jackson as 3-star plus recruit.

"Trey was one of the best receivers in the country," Lemming said. "He's got real good height and real good hands. He's more than just a red-zone receiver. He has all the tools to become an impact receiver."

Nash played his junior season at Memphis Central and then transferred to IMG Academy for his senior season where he got limited touches.

"I actually thought of him as a potential 5-star guy in high school, but at IMG they don't get a whole lot of attention that they would get if they would've stayed at their original high school because there's so many great athletes," Lemming said.

Lemming is high on quarterback KJ Jefferson, 6-3, 210, of Sardis (Miss.) North Panola but believes he needs some more seasoning.

"He's one of the sleeper quarterbacks nationally," said Lemming, who rates Jefferson a 4-star prospect. "Arkansas got themselves a very big and athletic guy. He can run and he can throw. He needs a little bit more polishing."

"They may have the best defensive end group in the country," Lemming said. "Some might wind up at defensive tackle, but right now they're defensive ends in high school."

Lemming, who rates all as 4-star prospects, said Clay has the potential to be great in Fayetteville.

"He's one of the top three players in Oklahoma," Lemming said. "I was just real impressed with him when I saw him and then watched him on film. He's a legit 4-star athlete that I think could be an All American in college."

The Hogs were able to flip the commitment of 3-star cornerback Greg Brooks, 5-11, 175 pounds of Harvey (La.) West Jefferson from Mississippi State on Wednesday afternoon. Arkansas is awaiting to hear from 4-star-plus safety Jalen Catalon, 5-10, 180, of Mansfield (Texas) Legacy in January.

Catalon, who's likely to decide between Arkansas, Texas or TCU, would give the Razorbacks a boost in the rankings should he join Brooks as a signee, Lemming said.

"It could propel them up a little higher," Lemming said. "It depends what the schools in front of them get, also. Those are two very good players."

Cornerback Devin Bush, 6-0, 187, of New Orleans Edna Karr is waiting until February to sign, along with defensive end Dante Walker, 6-3, 240, of Ellenwood (Ga.) Cedar Grove and defensive back Myles Brooks, 6-2, 190, of Pflugerville, Texas.

If the Hogs sign the majority of the remaining commitments in February, Lemming believes the class will have a chance to transform the program.

"Arkansas is on the path to having enormously successful year and one I think can turn this program around," he said. "This is how good this class is."