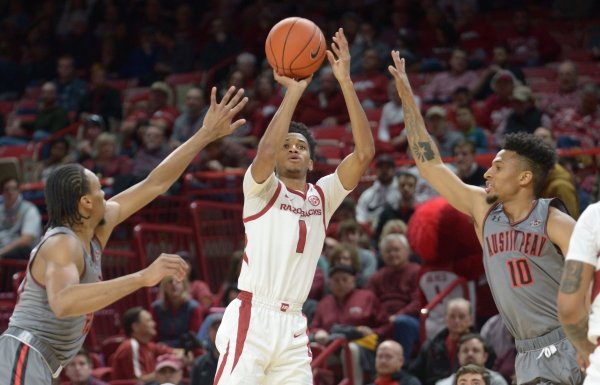 Arkansas coach Mike Anderson always tells his bench players to stay ready. Freshman guard Keyshawn Embery-Simpson was definitely that on Friday in the Razorbacks' 76-65 win over Austin Peay to close out 2018.

Embery-Simpson matched a career-high with 14 points in the game, all coming in the second half after missing on both shots prior to halftime. The IMG Academy product also scored 14 points in Arkansas' road win at Colorado State earlier this month.

Austin Peay coach Matt Figger said following the game that his team and his staff probably underestimated what Embery-Simpson was capable of offensively. To be fair, the freshman, since scoring 14 against the Rams in Fort Collins, had made only one shot from the floor and scored four points in the Razorbacks' last four games.

It's always been about playing with confidence and without hesitation with Embery-Simpson it seems, and Friday there was no second guessing his jumper. Anderson has stated in the past and did again Friday that he likes what Embery-Simpson brings to the floor on the defensive end, and that is what has led to the bulk of his playing time.

But he scored 12 points over a five-minute span during the Razorbacks' game-changing 20-5 run that turned a 52-48 Austin Peay lead into a 68-57 Arkansas edge. His two second-half 3-pointers were his first triples since burying 4/5 looks at Colorado State. He had misfired on his last six from distance since.

Entering the Georgia Tech game on Dec. 19, Isaiah Joe was shooting better than 63 percent from 3-point range in December. He was fresh off a 5/6 outing against Texas-San Antonio in which he added 20-plus points for the second time this season.

He then hit a bit of a funk against the Yellow Jackets, sinking just 3/12 looks from deep. With two minutes to play, Joe knocked down a triple that gave the Razorbacks a late lead, but pulled the trigger on an ill-advised 3 from several feet beyond the top of the key, which led to a breakout by Georgia Tech that completely shifted momentum in the visitors' favor.

He followed that game with a 1/5 shooting effort against Texas State. It marked the first time all season that Joe did not make at least two 3-pointers in a game. During the team's three-day Christmas break, he was back at home working on his shot, and it appears that he got back into a bit of a rhythm from distance against the Governors.

Joe semi-quietly scored 15 points and made 4/7 looks from 3-point range in the win. He came out firing, making his first 3 of the night in the game's first minute. He then buried two more before the 14-minute mark and made his last one with seven minutes left in the half.

"We gave him too many open looks. We knew going in that he can shoot it now," Figger said. " … If he makes shots they’re going to be right in the hunt of competing for a upper-tier berth."

While Joe did made Austin Peay pay for not paying especially close attention to him beyond the arc, he finished with five steals in the win. He seems to be in the exact right place at the exact right time a lot, which in turn leads to the high steals mark. There were a number of times in the game when he simply anticipated the pass seconds before it happened and he jumped the passing lane. That's good stuff and shows his high basketball IQ.

Gabe's passing standing out of late

Daniel Gafford referred to Gabe Osabuohien as "charge-taking Gabe" after Arkansas' narrow win over Texas State last Saturday. It's true, Osabuohien has been great in that regard this season.

But over the last two games, his passing has really stood out to me. Against the Bobcats, he tied a team-high with four assists in the win, and Friday night he totaled three more, giving him seven over the last two outings. It's impressive for a couple of reasons:

1 - Gabe had seven assists this season entering the Texas State game and did not have an assist in the four games leading up to it.

2 - Gabe had seven assists all of his freshman season.

Over the last couple of games, we've seen Gabe take a something of a step forward in terms of playing within himself on the offensive end. He's often times tried far too hard to go get his and score whenever the ball touches his hands. Lately, he's found Reggie Chaney and Daniel Gafford for scores on some really great looks.

One instance in the first half stands out - after catching at the free throw line, he scanned the defense and made a tremendous one-hand bounce pass to Chaney for a layup. Couldn't ask for a better look. Props to Gabe for finding a way to make a somewhat-positive impact despite playing limited minutes (10).

Daniel Gafford recorded his fourth double-double of December and his sixth in 12 games this season and hardly anyone batted an eye.

Gafford finished with a team-high 16 points, 10 rebounds and four blocks in the win. He was really good in the second half, too, scoring eight points and grabbing six boards to go with one steal, which he dove on the floor for after poking the ball away from an Austin Peay guard. He called for time and gave Arkansas possession. Great, heady play.

His outputs Friday essentially matched his averages for December. He'll finish the month averaging a double-double and nearly three blocks per game. Not a bad start to his sophomore season.

Freshman forward Reggie Chaney also turned in a nice game, finishing with 12 points on 6/9 from the floor and four rebounds in 25 minutes off the bench. If he plays like he did Friday, his minutes will remain high, especially with Adrio Bailey slumping a bit.

Chaney's first start against Texas State was very up and down, but he's beginning to come into his own as well. He finished December with three double-figure scoring games and he blocked at least two shots in five of seven games.