Thompson settles into role on this side of the Ozarks 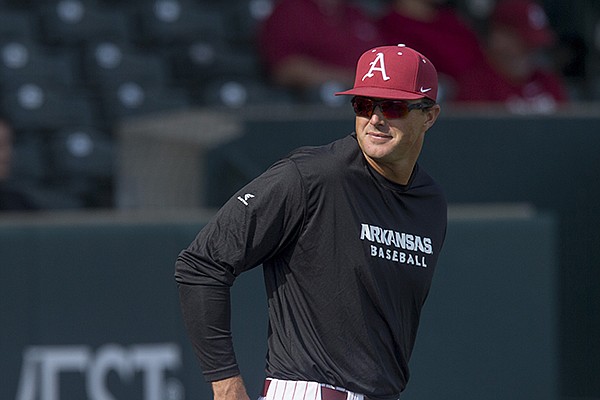 FAYETTEVILLE — When Hunter Yurachek was hired as Arkansas’ athletics director late last year, he commented that his best win had just become his worst loss.

Yurachek’s popular quote was in reference to Houston’s blowout win over Arkansas’ basketball team three days before he was hired by the Razorbacks. Yurachek formerly led the athletics program at Houston.

Nate Thompson could relate to that sentiment. One week after his Missouri State team eliminated Arkansas during an NCAA regional at Baum Stadium last June, Thompson found himself on the phone with Razorbacks coach Dave Van Horn, discussing the possibility of changing sides in a budding regional rivalry.

For fans, hiring Thompson away from Missouri State kind of served as bittersweet revenge for the Bears’ celebration - one that featured a dog pile and a Gatorade bath - on the Baum mound days earlier, an Arkansas loss that left the Razorbacks at home following their first home regional in seven years.

For Van Horn, the hire was more prudent than vengeful. Not only had Thompson coached Missouri State into one of college baseball’s highest-scoring teams, but he had developed a reputation as a strong recruiter in areas long valued by Arkansas.

And for Thompson, the move just made good business sense. The Razorbacks’ affiliation with the Southeastern Conference commands a higher profile than Missouri State’s and the Missouri Valley Conference, opening the door to more recruits and, down the line, potential head coaching jobs.

That Thompson, 35, was so familiar with Arkansas helped in his decision to make the move. During his three seasons at Missouri State, Thompson coached in 10 games against the Razorbacks, including six during the NCAA postseason.

“That was somewhat unique,” he said. “I love playing in this park. Opposing teams love to come here and play. The crowd and how intense they are, they’re fun. I wanted to come here for a regional because of those aspects.”

Thompson also had indirect ties to Arkansas’ coaches, Van Horn and pitching coach Wes Johnson. As a volunteer coach at Nebraska, Thompson had coached under Mike Anderson, a former Van Horn assistant during the Cornhuskers’ great run in the early 2000s that included two trips to the College World Series. As a player at Dallas Baptist, his hitting coach was Dan Heefner, who later became the program’s head coach and hired Johnson as a pitching coach, part of a series of events that built DBU into one of the nation’s best small-school programs.

Thompson said he relied on advice from Johnson and Heefner before he accepted the position at Arkansas. He also spoke to his older brother, Mitch, a former college assistant at Baylor and Auburn who now is the head coach at McLennan Community College in Waco, Texas. 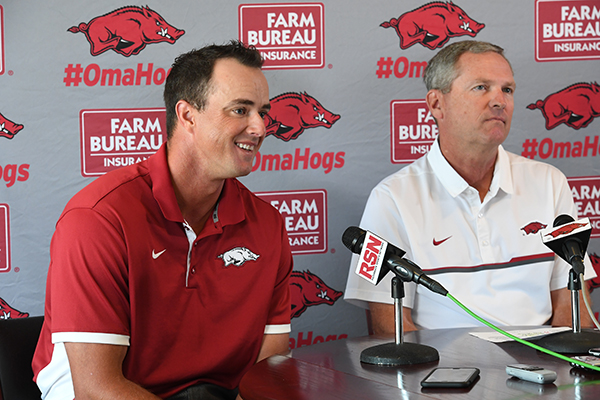 Thompson was given a lucrative contract by college baseball standards - $165,000 annually for two years - and plenty of money to spend on recruiting nationwide.

“The recruiting aspect is great,” Thompson said. “You have incredible resources and if you need to go see a guy, you go see him. You feel like you have what you need and have a legit shot at anyone in the country. That’s awesome.”

The resources have extended beyond recruiting. Thompson has brought new concepts and drills for hitters to use.

“He’s going to help you if you need it, but he’s not trying to change us,” said Grant Koch, a junior catcher. “You see the new things he’s gotten for us, like extra long bats (for drills) to help our extension.”

“He’s got boxing bags hanging for us to swing into,” said Jax Biggers, a junior shortstop. “There are wooden bats with screws in the barrels to hook on stretch bands. I think that’s not so much for bat speed as it is to increase our core muscles for control. He’s given us new ideas on a lot of things. What he’s done for me is help show how to use your legs and that’s going to add power. I’m not a home run guy, but he’s added to what I’ve got.”

Dominic Fletcher said, “What he brings plays into what I was trying to do. I am a drive-the-ball guy. He gives you freedom and we know he’s had success. He has drills to get you warmed up, heavy bats and things to create extension. It’s all things to create more power.”

Burger, who was a first-round pick (11th overall) of the Chicago White Sox last summer, credited Thompson for turning line drive doubles his freshman season into line drive home runs the next two years, saying Thompson taught him “to put more balls in the air and hit the bottom half of the ball.”

Thompson says he doesn’t love home runs as much as he loves to see players “hit it hard.”

“The only two stats I think matter at the end of the day are runs and RBIs. I want to find a way to create runs and RBIs, and utilize the skills and tools each player has…encourage them to play their game and to know their game, and be smart about it.

“It’s not an all or nothing mentality. We want to drive the baseball and play with speed, but we want to be really tough, too, and have the mindset to grind out at bats when needed. It’s good of individual baseball, but I think it’s good for team baseball, too.” 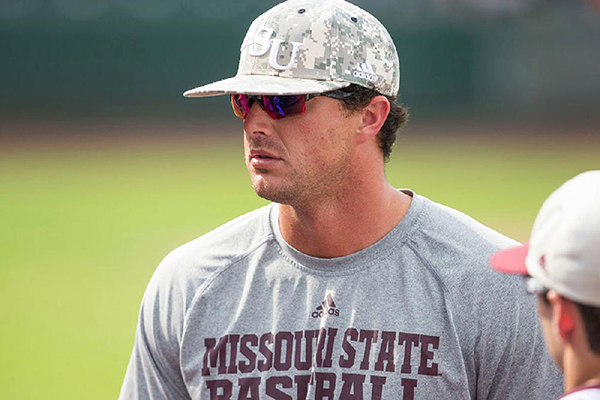 Nate Thompson's three seasons at Missouri State resulted in two trips to the NCAA super regionals and some of college baseball's most powerful offenses.

Like at Missouri State, Thompson has a talented group of hitters to work with at Arkansas in 2018. The Razorbacks return seven position players who started the final game last year, as well as a number of other bench players and a talented freshman class that will compete for playing time.

“He knows he’s inherited a good group of older guys, but he’s also excited about our young players,” Van Horn said. “Nate brings a lot of energy to the park. He’s introduced our players to new things, both concepts and drills.

“I tell our players all the time that they need to learn something from every coach who works with them. We’ve had good coaches here. That goes for Todd Butler, Dave Jorn, Tony Vitello and now with Wes Johnson and Nate Thompson. Take something from everyone.

“The feedback - and it’s not like I was trying to get it - from our players has been good.”