Phillips gets chance to live his dream as a Razorback 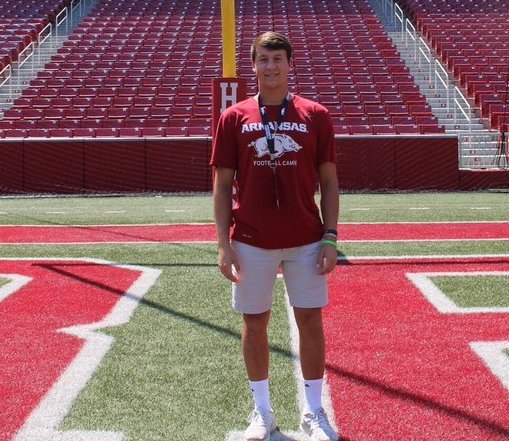 After announcing his commitment to Arkansas on Feb. 5, punter/kicker Matthew Phillips will now play for for the team he grew up watching.

“I loved the opportunity to play for the team I grew up cheering for, and I get to play in the SEC West and compete with the best teams in college football,” Phillips said.

His father, Bruce, and mother, Nancy, graduated from Arkansas.

“My mom and dad are very happy for me,” said Phillips, who has family in the Little Rock area.

Kohl's Kicking rates Phillips the No. 68 kicker and No. 33 punter in the nation. Phillips made 8 of 12 field goals with a long of 45 yards while 75 percent of his kickoffs resulted in touchbacks. He also averaged 38 yards a punt.

He’s thrilled to have the chance to run through the A.

“It’ll be the experience of a lifetime,” Phillps said. “I’m lucky to have the opportunity.”

Phillips was an All-Region defensive back as a junior and was Region 6-6A Kicker of the Year as a senior. He has a lot of fond memories while rooting on the Hogs as a youngster, but Arkansas’ 31-23 victory over LSU in 2010 stands out.

“My favorite Arkansas memory is when my dad took me to the Arkansas-LSU game in Little Rock,” he said.

He appreciates special teams coordinator Tanner Burns giving him a chance to live out his dream.