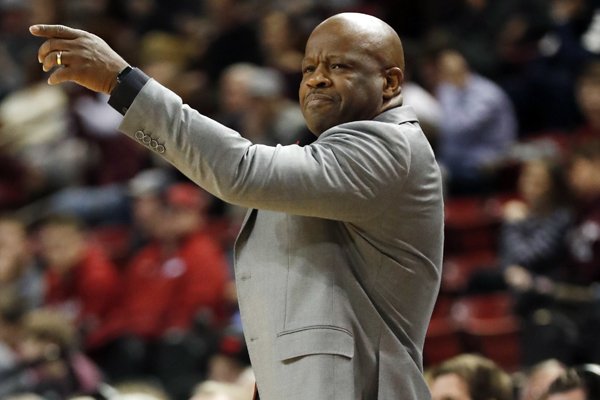 Arkansas head coach Mike Anderson gestures to his team during the first half of their NCAA college basketball game against Mississippi State in Starkville, Miss., Tuesday, Jan. 2, 2018. (AP Photo by Rogelio V. Solis)

FAYETTEVILLE — Everything Mike Anderson had to say about the loss at Auburn and previewing Wednesday's game against LSU:

-LSU is a team that we play home and home every year. They have some talent there and they've added Tremont Waters, who's one of the top scorers in the SEC.

-They beat A&M and lost to Kentucky at home in a real close game. It's a team coming in with the understanding that its the SEC, and every game matters.

-One message I've got to get to our guys is to get more defensive-minded and create havoc on defense. We talk about winning a conference championship, you've got to win at home and steal on the road.

-We've got to get the other guys involved. It can't just be Daryl and Jaylen. Darious Hall, Arlando Cook and Trey Thompson gave some good minutes at Auburn. The bench is going to be the difference in how good we can be.

-The teams in our league have played tough schedules and made for a tough conference race. The Waters kid at LSU is playing out of his mind.

-Arlando Cook got some treatment for an ankle injury sustained Saturday. Daniel Gafford is also fine.

-On Gafford: I think he got a couple of ticky-tack fouls called Saturday. He's got to learn to play smarter.

-On LSU winning away from home: They've been in big games this season, and they won't be fazed on Wednesday. We have to come out and play efficient basketball with the understanding the defense has to be on point.

-We've got to be there with 3-point shooters. They spread the floor and run a lot of screen and pops. We've got to make them drivers, and it's about having those third, fourth and fifth efforts. You've got to have energy off the bench.

-The guards' minutes have to come down some. Early in the year the reason why guys were efficient was other guys were coming in and giving good minutes. It was a good sign to see Trey Thompson come out more assertive.

-Sometimes you have guys that are too white collar. Arlando Cook isn't that.

-I think we've got to get to the point where the defensive mindset travels with us. When you look at some of the stats, we've got to be a team that can get to the free throw line.

-It's amazing when you've got certain guys out there how the ball moves. When you've got tired guys out there that's when the offense gets stagnant. When we're pushing the ball and running in the halfcourt set we're playing efficient. Teams are trying to take away certain things from us. You've got to take what the defense gives us.

-We had some shots against Auburn, we just didn't knock them down.

-Mike saw one of the 3-pointers Waters hit against Texas A&M and was really impressed. He also mentioned the freshman's name a couple of times on the SEC men's basketball teleconference. Mike said Waters has made those types of plays throughout the year for LSU.