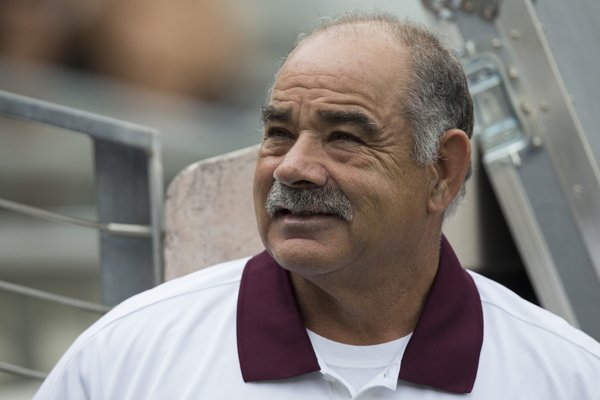 Chavis has been a coordinator for more than 20 years with stops at Tennessee, LSU and, most recently, the past three seasons at Texas A&M.

Linebacker signee Bumper Pool was recruited by Coach Chad Morris while at SMU and now will be playing for Chavis, who recruited Pool at A&M.

“He recruited me at A&M and was was one of the main reasons I even considered playing there.,” Pool said. “It’s wild how everything worked out — truly excited to get to play for him.”

Pool, 6-2, 220, 4.79 seconds in the 40-yard dash, of Lucas (Texas) Lovejoy chose the Hogs over more than 20 scholarship offers and will enroll in January. He was won over by Chavis during a recruiting trip to College Station.

“We talked one day in his office for a couple of hours and really got to know each other’s backgrounds and why he coaches this game and his different values,” Pool said. “He’s a very devoted Christian man and felt we were on the same page about a lot of things. He used to text me or he would tell me to call him about once a week to keep in touch. He was really the only DC that did that in my recruiting process.”

Defensive end signee Nick Fulwider, 6-7, 260, 4.79 seconds in the 40-yard dash, of Tyrone (Ga.) Sandy Creek said he and his family are familiar with Chavis

“I’m excited about the hire,” Fulwider said. “My family knew of him early on in his career when he coached at Alabama A&M and Alabama State. My grandad feels that he is a perfect fit for Arkansas and he will be good for my development as a defensive end. I can’t wait to meet him and start my transition into becoming the best defensive end in college football under his leadership.”

Springdale defensive lineman Isaiah Nichols, 6-3, 265, is impressed with what he’s heard of Chavis.

“I heard some great things about him, and coach Morris thinks very highly of him, so I’m excited to see what he can bring to the program,” said Nichols, who signed with the Hogs in December.

Highly recruited junior college defensive end Dorian Gerald, 6-3, 260 pounds, of College of the Canyons in Santa Clarita, Calif., was recruited by Texas A&M while Chavis was there.

"Coach Chavis is a good defensive coordinator," Gerald said last week."Everyone knows him. He was at Texas A&M when they were recruiting me, and I know he runs a 4-3, and I’m big on the 4-3. I feel like that’s where I fit in as a defensive end.”