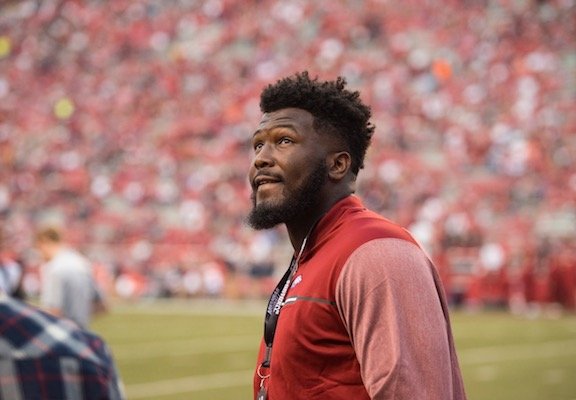 FAYETTEVILLE — There appears to be a chance that longtime Arkansas commitment Emmit Gooden might still end up playing for the Razorbacks.

“I called to congratulate him being named the new defensive coordinator, left a message and he called me back later,” Gooden said. “He said they were going to have a staff meeting on Tuesday to figure things out with scholarships.

“They need to figure out just how many scholarships they are going to use for defense and how many for offense. He said he would let me know something very soon and they are very interested if they have enough defensive scholarships."

Gooden said he is a fan for Arkansas’ new hire.

“I would really like to play for him,” Gooden said. “I think he is a great defensive coordinator.”

It was thought that Gooden needed two courses to be eligible at an SEC school, but he said Monday that his eligibility was contingent on one course that he is currently taking online.

“It’s actually an art class that I need to be eligible,” Gooden said. “I’m taking like a three-week class right now and I am hoping to have the grade back by Jan. 15.

“If I get that, I would sign with Arkansas and come right there. If not, I would then sign on Feb. 7. I want to play at Arkansas.”

Gooden - who was committed to both Tennessee and Mississippi State while in high school at Brownsville, Tenn., Haywood - pledged to the former Razorback staff back on June 18, 2017, after his official visit. He also had offers from Alabama, Georgia, Louisville, Southern Cal, Oklahoma, Mississippi State and many others at the time.

The four-star prospect says that he has stayed in contact with coaches from Oklahoma, Georgia and Memphis during the last month.

“If I can get to Arkansas that is where I want to be,” Gooden said. “If not, I’ll take a look at my options and go from there. But hopefully Arkansas will have room for me.”

Because of Gooden, Arkansas will be mentioned numerous times during next summer’s Season 3 of Last Chance U on Netflix. The series focused on Independence's season in 2017. The Pirates finished 9-2 and defeated Oklahoma A&M 30-20 in the Midwest Bowl Classic.

“We would have liked to have won all the games and had a chance to play for the national championship,” Gooden said, “but I felt like we did bounce back from the opener (a 70-21 loss to Iowa Western), got our mind on football instead of the cameras and had a great season.”