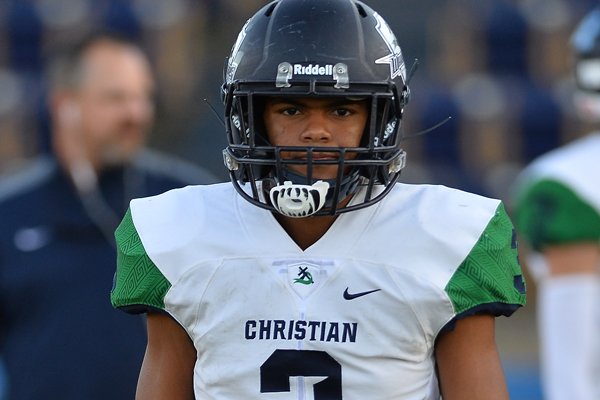 Little Rock Christian receiver Trey Harris warms up prior to a game against Pulaski Academy on Friday, Oct. 6, 2017, in Little Rock.

Trey Harris of Little Rock Christian chose the Razorbacks over a baseball scholarship offer from Arkansas-Pine Bluff and football offers from Air Force and Missouri Western. Harris (5-10, 160 pounds) is the sixth player from the state to verbally commit or sign with Arkansas in the high school class of 2018.

"I've always wanted to be a Hog since I started playing baseball," Harris said. "They've always had a very good program. Just getting to know (assistant coach Nate) Thompson and Coach (Dave) Van Horn, they see me having a bright future there.

"Their development program, I see guys making a big jump after they go there."

Harris was a football standout as a senior with 70 receptions for 1,184 yards and 16 touchdowns, but he also began to blossom as a baseball player last fall while playing for the Arkansas Sticks travel team. With the Sticks, Harris batted .408 and was successful on all eight stolen base attempts.

As a junior, Harris helped Little Rock Christian to the Class 5A state semifinals. The playoff run included Harris' game-winning home run off Watson Chapel pitcher Kaleb Hill, who is signed to play at Ole Miss.

Arkansas coaches offered Harris after he participated in a team camp last month.

"He had a really good fall for us," Sticks coach Chase Brewster said. "He was second on the team in stolen bases. It was really impressive because he would play a football game on Friday night and have 150 receiving yards, then come play with us on Saturday and get two or three hits in a doubleheader.

"He's one of the best football players in the state, so I think the assumption was he was going to play college football....When he focuses 100 percent on baseball, the sky is the limit. He's a late bloomer, but he's also a guy that hasn't been able to focus on his craft very much because he has been playing other sports."

Brewster said he thinks Harris projects to center field in college. Harris has been clocked at 6.4 seconds in the 60-yard dash.

"He has really good depth perception and is a really good athlete," Brewster said. "I would envision Coach Van Horn and Coach Thompson put him in center and see where it goes from there.

"He's quite possibly the fastest kid in the state of Arkansas."