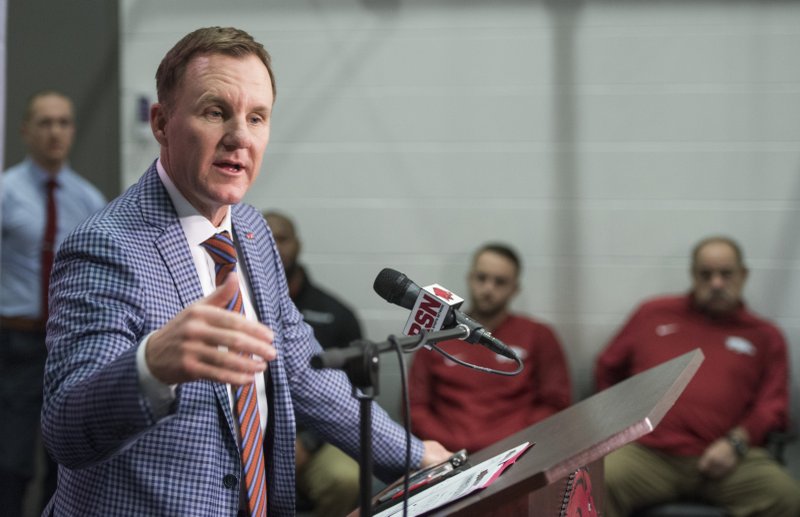 FAYETTEVILLE — Now at Arkansas and with more resources to land better talent, former SMU and new Razorback head football coach Chad Morris wants his entire staff to bring something to the table in recruiting.

The Razorbacks signed eight players in the Dec. 20-22 early signing period and have some “six to eight spots” to use for the Feb. 7 national signing date, Morris said.

“Everything starts with recruiting and I have said this before in my last press conference that if you can’t be involved in recruiting and add some value and worth to this football program to the University of Arkansas, you will not last,” Morris said. “That’s just the bottom line.

“Our ability to turn SMU around in two-and-a-half to three years that we did was strictly - and you can say Xs and Os all you want - but it is strictly about getting the right fit of player in there.”

Morris said he intends for the Razorback recruiting department to be one of continued growth.

Morris, whose staff can begin on-the road recruiting again when the NCAA recruiting dead period ends Thursday, has an idea of what he wants to round out his first recruiting class at Arkansas, which currently numbers five defensive players and three offensive ones.

“We’ve got to address the need...on the offensive line," Morris said.

After looking over his roster, Morris is sure about one thing it needs to add.

“Speed, speed and more speed,” Morris said. “You either have it or you're chasing it. You don't want to chase speed too long. You won't last long. I'm really excited.

“We actually had a couple staff meetings over the last few days after (offensive coordinator Joe) Craddock and (defensive coordinator John) Chavis had been able to evaluate both sides of the ball. We just kind of came back in, circled in, for an overview. I didn't ask for anything detailed like we will when we get back off the road here in a few weeks.

“I guess the major voice that we're hearing is hungry. They don't want to be home again during Christmas. It hadn't been quite the fun they thought it might be. It's not fun watching bowl games when you're not playing in them.”

Morris was asked about how he felt about the color anthracite, which Arkansas has worn at least once a year for the past several years. He turned it into an opportunity to explain how something as simple as a different jersey color can affect a potential recruit.

“Well, when you start looking at uniforms and you start looking at all kinds of things it goes back to our filter in everything we do and it's about recruiting,” Morris said. “I'm 49 years old and unfortunately 49-year-old people don't play at the University of Arkansas. It's about 18-year-olds.

“He not only has been at Arkansas, but we spent 15 years together at Tennessee,” Chavis said. “He was a big part of what we did at Tennessee also from a recruiting standpoint. You're not gonna find a better recruiter, not gonna find a better football coach anywhere in the country and not just with Steve, but with Ron Cooper, John Scott Jr. and with the entire staff that Coach Morris has put together.”

Chavis knows he needs to add some talent.

"When you start looking at the personnel there's some really good talent here at Arkansas,” Chavis said. “There's no question about that. Is there talent here to win 14 games? There wasn't this past year, but eventually there will be.

“I think that is what Coach (Morris) has been talking about. It's a process. That process starts in recruiting and recruiting to a certain style you want to play both offensively and defensively. But there's some talent here there's no question about that. We're looking forward to seeing it in the offseason.

“There’s some things, and I'm not gonna talk about those needs, but there's some needs we have to try to meet in the last half of this recruiting cycle we're in now.”