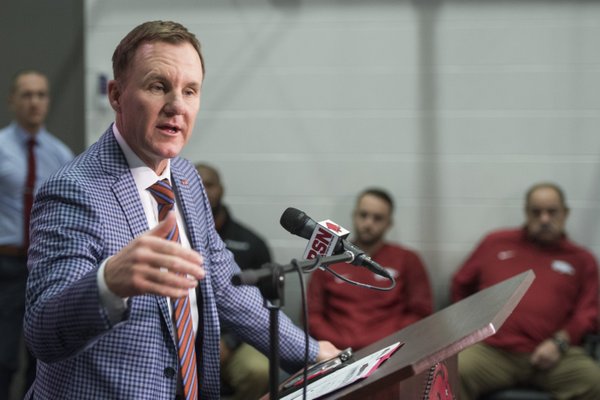 Arkansas Coach Chad Morris is expected to see one of the nation's top 2018 prospects once the contact period begins.

Receiver Tommy Bush said he's expecting Morris and receivers coach Justin Stepp to see him on Friday, the first day of the contact period. It appears the coaches will visit him at school and at home.

Bush, 6-5, 187, 4.47, of Schertz (Texas) Clemens has more than 40 scholarship offers from schools such as Arkansas, Texas, Southern Cal, Texas A&M, Oklahoma, Florida State, Baylor, Alabama and others. ESPN rates Bush a four-star prospect, the No. 9 receiver and No. 64 overall prospect in the nation.

The Hogs are hoping to get one of his two remaining official visits.

It appears Arkansas will not get an official visit from Texas A&M safety commit Brian Johnson, 6-1, 185 of Manvel, Texas.

Johnson said he told Morris he will just be focusing on Texas A&M at this point. The new staff extended an offer to Johnson.

Arkansas defensive target Dorian Gerald, 6-3, 260 of the College of the Canyons said Arkansas, Florida, Miami, Arizona and Louisville will see him next week.

Oklahoma receiver commitment Treveon Johnson, 6-1, 179, 4.4, of Brenham, Texas is expecting Stepp to visit him on Friday.

Scott and Caldwell are expected to do an in-home with defensive end signee Nick Fulwider, 6-7, 260, 4.79 seconds in the 40-yard dash, of Tyrone (Ga.) Sandy Creek on Friday.

The chances of getting an official visit from athlete Joshua Moore, 6-1, 171, of Yoakum, Texas appears to be diminishing. He's planning to visit Texas this weekend and has plans to visit Florida State.

Offensive lineman Ryan Winkel, 6-6, 280, of Christian Brothers High School in Memphis is expecting Fry and possibly Craddock to visit him Friday. He plans to visit Mississippi State on Jan. 19-21.

Thirteen recruits have plans to officially visit Arkansas before signing day on Feb. 7.

Prospects who have plans to visit: