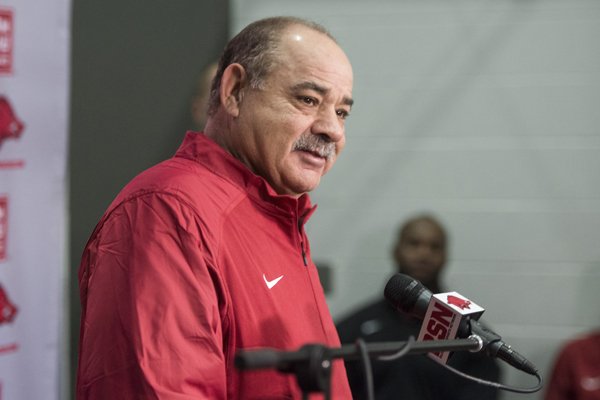 Arkansas looks to be in good shape to get the last official visit of defensive end Caleb Okechukwu because of Coach Chad Morris and defensive coordinator John Chavis.

"I think because of how honest they were and how real they were," Okechukwu said. "I'm leaning toward them right now on the second."

Morris started communicating with Okechukwu about a week ago and extended a scholarship offer Saturday.

"He told me he was excited about me and he really wants to be the last school to get the official visit on the 2nd," Okechukwu said.

Okechukwu played in the Under Armour All-American game on Jan. 4 in Orlando, Fla., and his performance helped him add scholarship offers from Texas, Tennessee and the University of Arkansas, Fayetteville to go along with others from Arizona, Massachusetts, Florida Atlantic and others.

"It's pretty cool because I knew I was underrated throughout this process," he said. "There were times when it was frustrating, but my coach always told me keep grinding, keep grinding and that led to me having a great senior year."

Morris impressed him with his plans for him, the program and life after football.

He recorded 81 tackles, 16 sacks and 38 tackles for loss as a senior. Razorback fans have shown Okechukwu a lot of attention on Twitter and have urged him to check out the Hogs.

"It's really nice to see that I've haven't even been down there and the people are watching my film and telling me, 'This kid is great. Check him out,' " Okechukwu said. "I like how all the fans can't wait for me to get out there. I feel welcomed already and I'm not even there."

The Razorbacks also recently extended a scholarship offer to linebacker Andrew Parker, and he plans to visit Fayetteville this weekend or the next.

Parker, 6-2, 225, 4.56 in the 40, attends Sophie B. Wright High School in New Orleans, a charter school that opened about eight years ago and doesn't see many college coaches.

"I'm really interested and excited about the offer from the Razorbacks," Parker said. "It's just a blessing to have the opportunity."

He has other offers from Georgetown, McNeese State and Houston Baptist while drawing interest from Colorado State and Louisiana-Lafayette. He's being recruited by defensive coordinator John Chavis and safeties coach Ron Cooper.

"Coach Chavis and Coach Cooper are two phenomenal coaches," Parker said. "Coach Chavis is arguably the best linebacker coach in the nation. It's a blessing that he sees great things in me."

Parker recorded 107 tackles, 26 tackles for loss, 3 forced fumbles and 1 recovered fumble while rushing for 275 yards and a touchdown on 14 carries as a senior.

Whenever he does visit Fayetteville, Parker said he might commit to the Hogs.

Parker has a 3.8 grade-point average and looking to major in computer science and computer engineering.