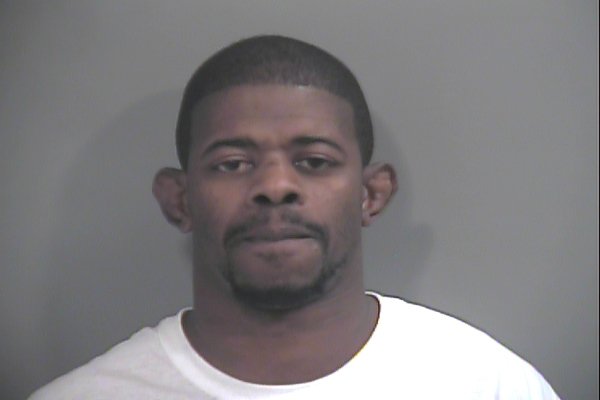 Fred Talley is shown on Monday, Jan. 15, 2018, at the Washington County Jail in Fayetteville.

FAYETTEVILLE -- Former All-SEC Arkansas running back Fred Talley was arrested by Springdale police Monday on possession of a schedule VI substance with intent to deliver and other charges.

Talley also faces charges of possession of a controlled substance, possession of drug paraphernalia and tampering with physical evidence.

Also arrested was Ashley Rogers, 32, whose listed address of 216 Windsor Ave. in Lowell is the same address as that listed for Talley.

According to the Springdale Police Department arrest report, police arrived at Room 112 of the WoodSprings Suites at 4397 Dixie Industrial Drive on Monday morning and advised Talley and Rogers, who were in the room, that it was being secured for a drug search warrant due to the strong odor of marijuana coming from the room.

Talley was arrested at that time, according to the report, due to an outstanding misdemeanor warrant from the Farmington Police Department for failure to appear. He was booked into the Washington County Jail at 10:47 a.m. He was released at 12:06 p.m. on Monday and later returned to the hotel.

The report states Rogers was advised that all mobile devices would be covered by the search warrant and that Rogers wiped all the data from her phone before giving it to a detective.

After executing the warrant, the police search of Room 112, per the report, turned up 2.3 grams of marijuana, one digital scale with methamphetamine residue, three cellphones, a baggie with marijuana residue, a pill bottle containing one 10 mg of Diazepam with no label on the bottle and a colorful rubber container.

The police report states Rogers also had been registered in Room 325 at the hotel, and a search of that room turned up a handgun. Police conducted a criminal check of Rogers and determined she was a convicted felon, according to the report.

A subsequent search of Rogers' vehicle turned up a digital scale with methamphetamine residue, a marijuana "blunt" of approximately 0.7 grams and a credit card in Talley's name under the scale, according to the report.

When Talley and Rogers returned to the hotel to pick up their belongings and vehicle, they were taken into custody without incident.

Both Talley and Rogers face a 7:45 a.m. hearing today in Washington County Circuit Court. Talley also has been given bail of $440 and a March 21 date in Farmington City Court on the charge for failure to appear.

Talley, a first-team All-SEC selection in 2001 and a second-team choice in 2002, ranks eighth on Arkansas' career rushing chart with 2,161 yards. The native of Longview, Texas, rushed for a career-high 241 yards, which ranks third on Arkansas' single-game chart, in the Razorbacks' 38-17 victory at Auburn in 2002.