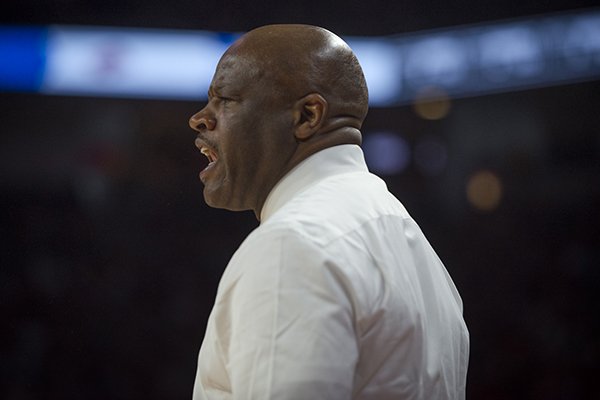 Arkansas coach Mike Anderson shouts to his players during a game against Tennessee on Saturday, Dec. 30, 2017, in Fayetteville.

Anderson's contract was extended two years through the 2021-22 season and his total compensation was increased to $2.55 million per year - a $2.35 million base contract with a $200,000 personal services agreement from the Razorback Foundation. He is eligible for up to an additional $1 million per year in academic- and athletic-based bonuses.

Anderson previously was under contract through March 2020 at an annual base salary of $2,250,800. Buyout terms have not changed and both Anderson and the university would have to pay $1 million per year to terminate the contract for its duration.

Anderson signed the contract extension Nov. 22, 2017, but it was not finalized until a meeting of the university's board of trustees on Thursday.

“I am appreciative of this meaningful expression of support for the continued direction of the Razorback men’s basketball program,” Anderson said in a statement. “Our entire staff and our student-athletes are committed to competing and winning in the Southeastern Conference and nationally. We are also making a difference in helping mold young men and pointing them toward their college degree. We have made significant progress, but we still have work left to do. I’m confident, with the passionate support of the Razorback fans, we can reach our goals.”

Anderson is 142-80 in his seventh season as the Razorbacks' head coach. Arkansas has a 14-6 overall record and 4-4 SEC record entering Saturday's nonconference game against Oklahoma State.

Since then Arkansas has gone to the second round of the NCAA Tournament twice and finished SEC Tournament runner-up twice, in 2015 and 2017.

“Razorback men’s basketball is on the rise," Fagg said. "Our team is among the best in the SEC this season and the upcoming recruiting classes are among the best in program history. We are excited about the future and partnering with Coach Anderson and his staff as we take our program to new heights.”

Anderson is in his 16th season as a head coach and has a career record of 342-178 in stints at Arkansas, Missouri and Alabama-Birmingham. He spent 17 seasons as an assistant coach at Arkansas from 1985-2002.

CORRECTION: This story has been changed to include Anderson's personal services agreement with the Razorback Foundation in his total compensation.