Stronger Biggers proves to be tougher out 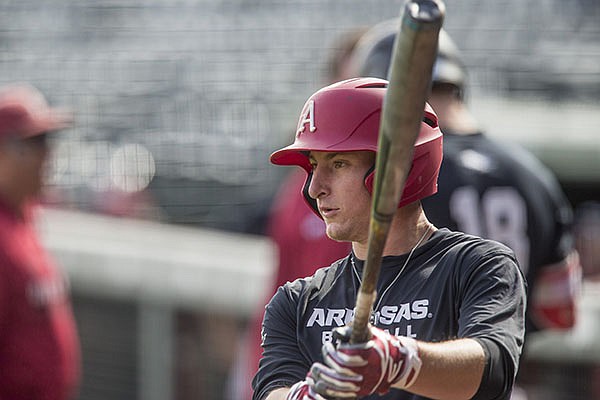 Arkansas shortstop Jax Biggers warms up in the on-deck circle during a scrimmage Wednesday, Oct. 11, 2017, in Fayetteville.

FAYETTEVILLE — Arkansas pitcher Isaiah Campbell marvels at the work ethic from shortstop Jax Biggers and saw firsthand the way he battles in the box during the fall.

In a few weeks it will finally be time to let the opposition try to get Biggers out.

“I want to face some guys with something beside Arkansas on the jerseys,” Campbell said. “We’ve battled each other long enough.”

That goes double for seeing Biggers.

There are a few more scrimmages where Arkansas pitchers face Biggers. There’s one set for Saturday around 12:30 p.m. following media day for the baseball team. It is free and open to the public, weather permitting.

Biggers will be fighting pitch after pitch. He’ll whack a borderline pitch foul, or pass on those just out of the zone pressing pitchers to the limit each at bat.

Biggers hit the ground running last season, his first with the Hogs after a season at Cisco Junior College in central Texas. The junior from Missouri City, Texas, led the Hogs in hitting last season with a sparkling .338 average. It was tops among SEC regulars at shortstop.

“He’s a guy I love off the field, but not so much on the field,” Campbell said. “I’m talking about our scrimmages. I faced Jax four times in the fall. It went 10 pitches all four times, 45 total. He competes.

“I love the way he competes in the field, too. That’s exciting to take the mound with him at shortstop.

“I’ve never seen anyone work that hard. Grant (Koch) and Jax are hitting every time I go into the indoor facility. What he puts himself through is grueling.”

Biggers said his dad, a former college baseball coach, told him the best way to field ground balls is when you are tired.

“You want to hit until you get fatigued, then take grounders,” he said. “I just want to get better.”

There is a belief that first-year assistant Nate Thompson made Biggers better.

“I sure think so,” Biggers said. “He’s a great coach. I know everyone gets something different from him, but me personally, it was how to handle the low and away pitch. I never have had much power my entire life, but I’ve gained about 15 pounds and it’s a lot in my legs. I’ve been weak in my legs my whole life. Not now. He’s helped me learn how to use that leg strength.”

Thompson learned to appreciate Biggers when he saw him last year as a Missouri State assistant. The Razorbacks and Bears played four times in 2017, including three times in the NCAA regional.

“Jax is a big-time gamer, man,” Thompson said. “ He hit a triple and a double last year in the game in Springfield and he’s just motoring around the bases, just flying it felt like.

“I was sitting there thinking, ‘Man, this guy can really hit, can really run and he’s dynamic.’ He’s got a little bit of pop that I think is going to play to the pull side. He’s tough and he’s really smart.

“He’s done a really nice job this fall of flattening his swing a little. He produced last year in a big-time way - hit over .330 against the quality of competition Arkansas faced last year, which was pretty outstanding. We don’t want to fix something that’s not broken, but I felt like there was a little more there and I think if he plays with the bunt game a little bit, too, he’s going to be hard to defend.

“He can drive one of out of the yard, he can hit a double or triple into the gap real easy or he can have a 10-pitch at-bat. He’s very multi-dimensional. I love that kid.”

Biggers is glad the season is about to begin. He can’t wait for the opening weekend against Bucknell starting Feb. 16.

“The quicker I got back from Christmas, the sooner we would be playing and I can’t wait for this season,” Biggers said.

“We are all eager because we know what we’ve got. We should be good. We were good last year. We were probably better than what people thought we’d be, but we didn’t do as well as we should have done.

“We’ve got really good returnees, really good freshmen. We got some guys like Blaine Knight, Carson Shaddy and Luke Bonfield who most probably thought would have left after the draft. Getting them back is huge. Blaine is our Friday night guy and to get him back is tremendous.”

The Hogs didn’t need DI Baseball lead writer Kendall Rogers picking them to win the national title to get their minds on a championship run.

“If you don’t know it’s the goal here, then you probably aren’t here,” Biggers said. “I mean, you come here for that shot. It’s the goal of every one of us. We have everything you need to win it here.”

Biggers was talking about facilities, fans and coaches.

Arkansas coach Dave Van Horn said that’s why the 2018 schedule is loaded with top out-of-conference games against Texas, Texas Tech, Arizona, Missouri State and Southern Cal. There’s no doubt the SEC is as strong as ever, full of older players, just like the Razorbacks.

“You look at this schedule and you get excited,” he said. “It’s great for the fans. I wanted that for them, but then you realize it’s a big mountain to climb.

“I did it because I want to win a national championship. That’s how you do it.”

The goal is to face the kind of schedule that will put the Hogs – if successful – in the running for a national seed, which would keep them at Baum Stadium for the first two rounds of the NCAA Tournament.

“If we handle it, it will get us prepared for what we want to do, play deep into June,” he said. “It will give our pitchers a chance to face great competition in the midweek games. We have the depth that we don’t have to recycle guys.

“If someone saves their top guy for us, we’ll have someone good. Everyone wants to beat an SEC team, so we will get some of that. We should have a big RPI if we play well.”

The Hogs are as solid through the middle of the field with Biggers setting a great example as a workaholic.

“We have to run him out of here,” Van Horn said. “He’s a baseball gym rat.

“I really like what we have in the middle of the field. You want to be strong there, and we are with Grant at catcher, Jax at shortstop, Carson Shaddy at second base and Dominic Fletcher in center. We’ve got depth at all of those positions, too.”

All four of those have an all-conference look. Koch led the USA Collegiate National Team in hitting last summer. Depth is good everywhere, including at catcher where Koch had to go without rest for much of last season.

Van Horn has the option of resting Biggers some, too. The pitchers on the Arkansas staff hope he does it in some of the scrimmages over the next three weeks. They are tired of those 10-pitch at bats.