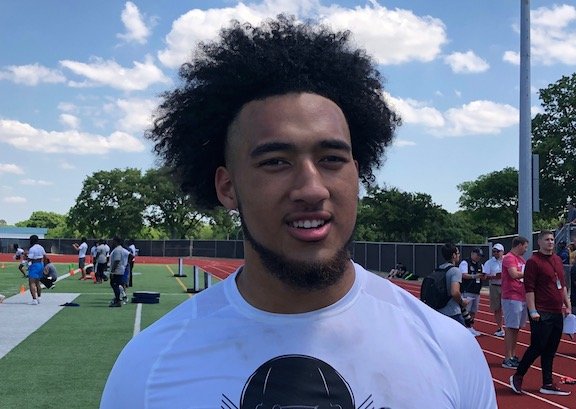 Wilkins, who’s at The Opening at the Dallas Cowboys’ Headquarters at The Star, spoke with offensive coordinator Joe Craddock, running backs coach Jeff Traylor and other coaches before arriving for the event.

“I want to be able to keep my relationships going with the coaches,” Wilkins said. “I have a real good relationship with them. To be able to go up there and see the other side of them family-wise and have fun.”

The Razorback coaches are in constant contact with Wilkins.

“They check in on me all the time,” Wilkins said. “Ask how I’m doing and ask how the family is doing. They really don’t try to make it too much about football. It’s more about family.“

Wilkins, 6-7, 280 pounds, has more than 20 offers from schools such as Arkansas, Oklahoma, Texas, Georgia, Alabama, Miami, Southern Cal and others. There were rumors he was going to commit to Oklahoma several weeks ago.

“I wasn’t going to pull the trigger,” Wilkins said. “I have a timeline set up. There were a lot of rumors going on about that.”

In addition to Arkansas, Wilkins has set dates for official visits to Oklahoma for the UCLA game on Sept. 8, Texas for the Southern Cal game on Sept. 15 and Georgia for the Auburn game on Nov. 10.

“My fifth one, I might take it to Miami, but I’m not sure. I might wait and see what other offers I have to come,” said Wilkins, who has eliminated Southern Cal for consideration for an official visit.

His hometown of Camden has a strong Razorback following and would like to see Wilkins in Fayetteville.

“Again they all want me to stay home, but at the same time they always tell me to make whatever decisions that’s best for me because not too many people in my town get that chance or make the best of it,” Wilkins said. “So I can make it big one day and hopefully come back and provide for the community and give back.”

Wilkins has a plan leading up to the time he makes his college decision.

“Right now, I’ll be dropping a top 8 or top 10 before football season or the beginning of the season," he said, "then I’ll drop five most likely toward or in the middle of the season or at the end. Then whatever bowl game I’m blessed to play in I’ll make my decision there."

The recruiting process can be stressful, but Wilkins is determined to make a wise decision.

“You have to take it all in and consider everything, make the best decision and not do anything stupid,” Wilkins said.