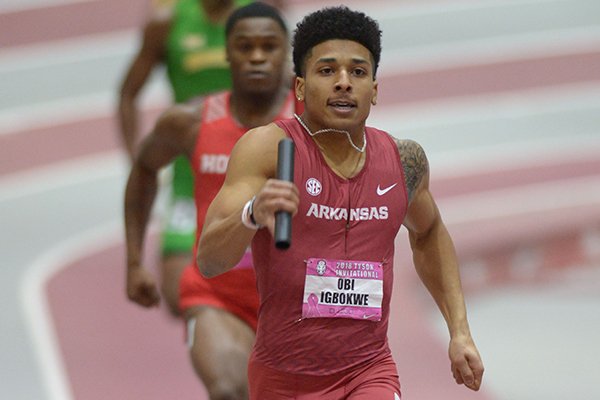 Arkansas' Obi Igbokwe competes in the 4x400-meter relay Saturday, Feb. 10, 2018, during the Tyson Invitational in the Randal Tyson Track Center in Fayetteville.

FAYETTEVILLE — Obi Igbokwe, an eight-time All-American sprinter for the Arkansas Razorbacks, was arrested by Fayetteville police on Saturday and charged with driving while intoxicated, careless driving, having an expired vehicle license and driving without proof of insurance, according to the Washington County detainee website.

Igbokwe, 21, was released after posting a $1,250 bond and has a hearing schedule in Fayetteville District Court on Aug. 20.

As a junior this year, Igbokwe earned two All-American honors at the NCAA Outdoor Track and Field Championships when he finished sixth in the 400 meters in 45.15 seconds and ran a leg on the Razorbacks’ sixth-place 1,600 relay team.

Igbowke, who is from The Woodlands, Texas, finished fifth in the 400 at the USA Championships where he ran 45.23 seconds.