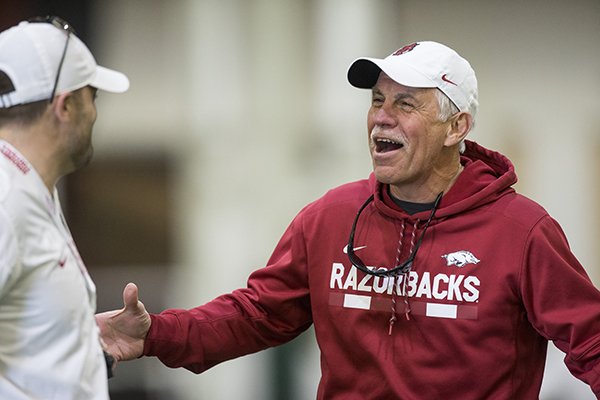 FRISCO, Texas - One of the premier and athletic outside linebackers in the nation, Derick Hall, plans to be in Fayetteville for an official visit to check out the Arkansas Razorbacks.

"He's still talking about getting me up, so late July or early August," Hall said. "I'm going to do my official to just get up there and see what it's about."

He's lived up to his ESPN four-star rating at The Opening, the prestigious summer event being held in Dallas Sunday through today. ESPN also rates Hall the No. 15 athlete and the No. 183 overall prospect.

His speed and quickness are prefect fits for the Hogs' Will or Sam linebacker spots.

Hall praised Caldwell and receivers graduate assistant Kelvin Bolden for their efforts in recruiting him.

"We don't talk as much as we use to because I've been very busy, but I'm definitely going to get back on the ball with that," Hall said of Caldwell. "He's a great guy. Then I talk to coach Bolden the GA. He's a great guy. He's from Moss Point. They're overall great guys."

Being a Mississippi native, Bolden has strong ties to the state and has also been a key in gaining the interest of Ole Miss linebacker commitment Diwun Black, 6-4, 210, of Forest, Miss. Black is looking to visit the Hogs on July 27.

"It helps, and Jonathan Nance is up there from Gulfport," Hall said. "They're in my ear. It helps toward some aspects, but it's about doing what's best for me."

Hall recorded 34 tackles, 2.5 sacks, 5 tackles for loss and 6 quarterback hurries on defense, and he caught 8 passes for 132 yards and 3 touchdowns as a junior. He was also outstanding on the hardwood, leading his school's team by averaging 12.5 points and 8.9 rebounds this past season.

The NCAA dead period began June 25 and ends July 24. The period forbids face-to-face contact between prospects and college coaches on or off campus while still allowing communication between the two parties.

Hall explained why he plans to visit Fayetteville.

"Just the coaches, just the way they like me, they talk to me a lot," Hall said. "They keep pushing me to try and get me on campus, so that shows they really want me and just the connection we have."

He's considering engineering as his major.

"They've sent me a little packet," Hall said. "They have everything I would need there to be successful."

Hall's college decision likely will happen in the next month or so.

"It could be some time late July or the second or third or fourth week, it could be August, but could be later," Hall said.

Cornerback Bobby Wolfe will announce his college decision today at The Opening.