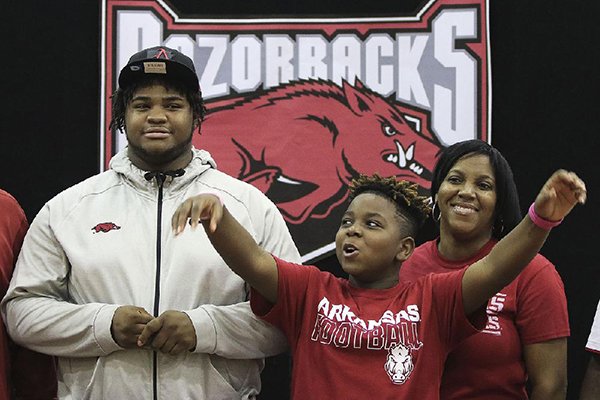 Arkansas Democrat-Gazette/STATON BREIDENTHAL --12/20/17--Fordyce's Billy Ferrell (left) along with his mother Rene Stuckey (right) and his younger brother Malik Harden, 12, call the Hogs Wednesday afternoon after Ferrell signed to play football at the University of Arkansas.

Billy Ferrell is looking forward to picking on someone his own size.

At 6-3, 330 pounds, Ferrell always found himself in mismatches during practice at Fordyce High School. According to the Redbugs' 2017 football roster, the team's second-largest player weighed 80 pounds less than Ferrell.

Ferrell at a glance

Noteworthy Son of Billy Ferrell Sr. and Lakita Stuckey. ... A first-team selection for the Arkansas Democrat-Gazette’s All-Arkansas Preps team as a senior. ... Ranked the No. 53 defensive tackle and the No. 7 player in Arkansas by Rivals.com. ... Had 63 tackles, including 8 for loss, 4 forced fumbles and 2 fumble recoveries. He also rushed for 3 TDs and ran for 136 yards. ... As a junior, he made 37 tackles, including 6 tackles for loss, and was in on 4 sacks. ... He chose Arkansas over scholarship offers from Alabama, Wisconsin, Louisville, Memphis and Colorado State.

The first in a series highlighting newcomers to the Arkansas Razorbacks football team.

Obviously, Ferrell was an intimidating presence.

"He stood out," Fordyce Coach Tim Rodgers said. "His size, his weight, it was hard to find someone to match up against him in practice. We really didn't have anyone who could push him."

Ferrell said he knows that's going to change once he gets to Fayetteville, where he plans to make a push of his own to get playing time as a defensive tackle for the University of Arkansas, Fayetteville.

Ferrell has played organized football since the second grade and has always been among the largest players on the field. As a second-grader, Ferrell was placed on teams that were largely comprised of players three or four years older.

"He's always been the strongest and biggest guy in practice," Rodgers said. "When he was in junior high, we would put four or five players across from him just to give him a little something to work against."

Ferrell wound up being the Redbugs' second leading tackler in 2017 despite the fact opposing teams rarely would run toward him.

"It was so easy for him to manhandle people in practice," Rodgers said. "He was a great guy in practice because he knew when to let up. But in games, he would unload on people."

While defensive tackle is not considered the most glamorous position on the field, Ferrell said there are reasons he finds it appealing.

"I love getting after the quarterback," Ferrell said. "I like to chase them and make them feel me coming after them."

Rodgers said Ferrell is a smart player who has asked to be placed in the most advantageous position to help the team. Ferrell played defensive tackle when the Redbugs were playing a run-oriented team, and at defensive end when the opponent was more likely to pass.

"If we were having trouble in an area, he would come to me and say, 'Coach, put me over there,' " Rodgers said. "There were a lot of teams that would look where Billy was playing and run the play to the opposite way. That's the biggest reason he didn't have as many tackles as he did the previous two years."

Ferrell says his immediate goal is to "work hard" and to drop 40 pounds before the fall.

"The best thing about Billy is that he doesn't get into trouble," Rodgers said. "His parents have done a good job with him, and he hangs around a good group of kids.

"He's coachable and he'll learn quickly. At Arkansas, he'll be around guys his size and he'll hang with them. He's going to be pushed every day, and he'll have to adjust to that, but he's the type of young man who will."