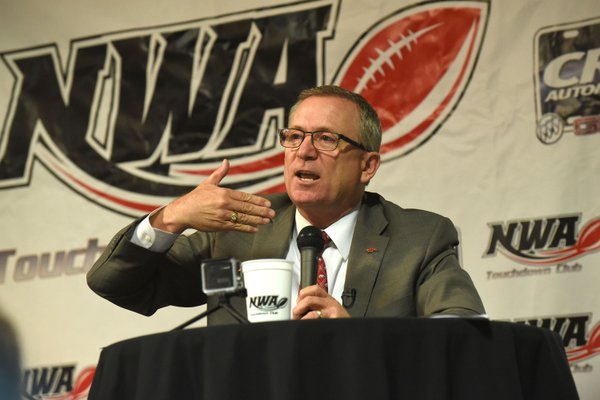 Good for Jeff Long in getting another chance to be a Division I athletic director.

It was beginning to look like he might have to take a step back, but he persuaded Kansas to pay him $1.5 million a year, which gets the Razorback Foundation off the hook for more than $4 million it owed him to go away.

Actually, some may say Kansas is a step back. It is a member of the Big 12, but outside of basketball -- where it is on an elite level -- the Jayhawks don't exactly rock chalk.

One thing Long should have learned during his time at the University of Arkansas, Fayetteville is you don't replace a legend by being an empire builder, something that seemed to be a natural tendency for Long. He loved to be on the field during football games, even escorting some of the biggest donors through the A, an honor originally reserved for actual football players.

He loved to be on the basketball court handing out honors, or at least he did until he got the somewhat controversial Reynolds Razorback Stadium expansion approved -- an expansion that does nothing for the current students.

The Razorback Riviera is just more of what colleges all over the country are doing -- counting on the corporate world.

When Long was fired, part of the reason given was he had lost contact with some of the fans. To put it another way, he didn't seem to care much about the Razorbacks' history and tradition in sports.

The people who gave blood, sweat and tears to compete in the old Southwest Conference were a closed chapter to Long. Only the SEC was important.

Long did have the UA ranked in the Learfield Directors' Cup, and he served on the College Football Playoff selection committee.

However, Long will be remembered for hiring Bobby Petrino -- whom he assigned two assistant ADs to deal with -- John L. Smith and Bret Bielema.

Those hirings probably hastened his firing last year because the hiring of a new football coach was imminent, and the board of trustees apparently didn't have confidence in his hiring abilities.

Long wasn't a bad person; he was just different. Not sure he ever truly understood the passion of the blue-collar fans, those who save money all year to buy their tickets and celebrate their tailgates.

That's one thing his replacement, Hunter Yurachek, seems to have embraced naturally.

Long seemed to hire assistant athletic directors on a regular basis and ended up with one of the biggest staffs in the SEC, and layers and layers of people between him and the fans. All but one of his hires were from outside of the state.

Long was hired by John White on the recommendation of David Gearhart, who soon would replace White as chancellor. White, Gearhart and Long shared the new vision of college administrators who raise and spend as much money as possible, but not on the cogs of the academic wheel -- the professors.

Long was a complicated person. He embraced the coaches and players, and ignored the majority of the fan base.

Now, Long has a new lease on his life in athletics.

He needs to understand that basketball Coach Bill Self is an untouchable KU legend -- like Frank Broyles at the UA -- whose record speaks for itself.

All things considered, Long may have found a better fit for him personally and professionally, at a school with almost no football expectations. Nowhere to go but up.