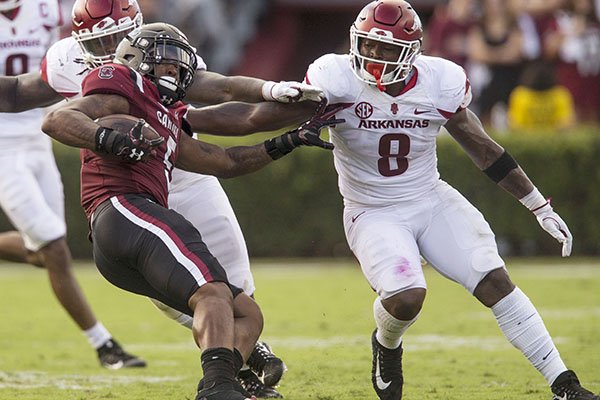 Arkansas linebacker De'Jon Harris (8) makes a tackle during a game against South Carolina on Saturday, Oct. 7, 2017, in Columbia, S.C.

FAYETTEVILLE — De’Jon Harris sat in standstill traffic for hours on end in his family’s car as he and his relatives began their journey to Mississippi.

Harris didn’t like it much, but the trip was a must. Panic had set in.

He was 7 and in second grade, and Hurricane Katrina was fast approaching his hometown of Harvey, La.

The first stop was one state over at a family member’s home. The conditions were far from ideal, but it beat catching strays from the brunt of the single most catastrophic and costliest natural disaster in United States history, according to the Federal Emergency Management Agency.

Harris recalls 40-50 people packing the house on a given day, sleeping on air mattresses and, to add insult to injury, there was no electricity.

“It was all about trying to survive,” Harris said. “We couldn’t cook nothing and sometimes you’d have to bathe in cold water.”

The family packed up and headed to Galveston, Texas, next where it was set up in a hotel and Harris was able to catch up with a few friends. The hotel stay was short-lived, though. Hurricane Rita was on its way.

“We had to hurry and pack up and go to Houston,” Harris said.

“We stayed in a school, like 16 classrooms. It was one building in Houston. My aunt, I think, knew somebody. She used to be a school teacher, so we stayed in there. We had electricity in there and all, so it was fine.”

When Harris’ family returned home, everything was still standing, but damage to the community was substantial.

“It was just bad. We were out of electricity for weeks, and water,” Harris said. “The environment was just depressing, really. Not everyone was back, and mostly I remember a couple of them crying and saying all the things they lost and their family members they had lost.”

But through his struggles, Harris has grown into one of the most well-known and feared defensive players and linebackers in the Southeastern Conference all the while going about his business in a reticent, reserved manner.

In 2017, Harris (115 tackles, 8.5 for loss, 3.5 sacks) became just the third Razorbacks player to record at least 100 tackles, eight tackles for loss and three sacks in a season since 2000, according to Sports Reference. He was the program’s first to do so since Jerry Franklin in 2010. The other was Sam Olajubutu in 2005.

Not even Martrell Spaight, a 5th round selection of the Washington Redskins in the 2015 NFL Draft, reached those figures, although he did finish with 128 tackles in 2014. Learning that fact drives Harris to want to – somehow – take his game to another level.

“I want to be the best to come through Arkansas,” he said. “Jerry Franklin is at least one of the best, if not the best. It’s motivation for me.”

Much like his upbringing, his road to stardom at Arkansas was anything but a joyride. Shortly after arriving in Fayetteville for his freshman year in the summer of 2016, Harris’ father, Antonio McClure, passed away.

Harris didn’t return to campus until the last week of June, he said.

“That was one of the hardest moments for me,” Harris added. “I was close with my father. He was in and out of jail a majority of my life, but he always checked up on me. He tried to keep the relationship even though he wasn’t there for me. When I was younger, I remember him being at all my games through the neighborhood.

“I was starting quarterback when I was young, so the whole neighborhood would be there to support. I stayed with my godparents throughout my life, so he and my mother were always there for me and always checked up on me.”

Harris continued to battle during his first season at Arkansas, and he got an opportunity to shine in an unenviable position — at home vs. No. 1 Alabama on a national stage. In the first quarter, linebacker Dre Greenlaw left the game with a broken foot. Harris was forced into action.

He made an impact, too, totaling four tackles and forcing a fumble on the Crimson Tide’s opening possession of the second half, which was recovered by Ryan Pulley at the Arkansas 3.

“I was nervous. It was a home game and it was basically my first real game because Alcorn State — the experience in Little Rock wasn’t like playing Alabama,” Harris said. “I was kind of nervous. It was a little fear going in, but I wasn’t extremely nervous.

"But I was nervous going into that game.”