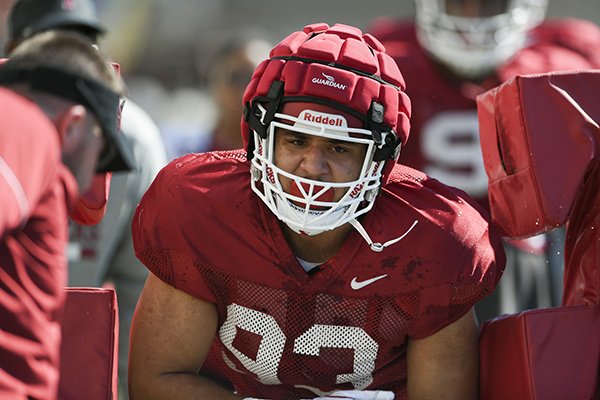 FAYETTEVILLE -- Before Isaiah Nichols played football, his sport was futbol.

Nichols, a freshman defensive lineman for the Arkansas Razorbacks, was introduced to soccer -- known as futbol by most of the world -- late in his eighth-grade year at Lisa Academy in Little Rock.

The school didn't have football -- only basketball and soccer -- and Nichols opted for the latter after joining classmates for an informal game.

"I'd never played soccer before, but I they had me at goalie, and I did pretty good," Nichols said. "I was quick with my hands and quick on my feet, so they told me, 'You should try out for the team.' "

By the next fall, Nichols was practicing as the starting goalie on the varsity soccer team, but he never played in a game for Lisa Academy.

His family moved to Springdale in the spring of his ninth-grade year, and Nichols finally had a chance to play the sport he really loved -- football.

Previously, Nichols' parents didn't want him to play football, he said, but they believed he was ready as a ninth-grader at George Junior High.

Students at George normally enroll as sophomores at Springdale High School, where Zak Clark was hired as head football coach in the spring of 2015.

Aspiring football players take the bus from George to Springdale the spring of their freshman year to work out. Shortly after Clark became the Bulldogs' coach, he got a call from George Coach Robert Johnson about a new student who never had played football but wanted desperately to give it a shot.

"You never know how someone like that is going to pan out. I wasn't holding my breath. But lo and behold, it turned out to be Isaiah Nichols."

Nichols tried to play football and soccer that spring, but he quickly decided to focus on one sport.

"My love for football outgrew me liking to play soccer," he said. "So I put all my chips into football and hoped for the best. And it kind of worked out."

"I was new to the game, and I didn't know that if it's a pass play -- unless you're blitzing -- you're supposed to drop back into coverage," Nichols said. "Every play I just tried to get to the quarterback. That's all I knew to do.

"I remember one of the seniors was like, 'Dude, you've got to drop back in pass coverage.' I was like, 'What? I didn't know that.' I was coming through the gaps pretty fast and getting downhill."

The Springdale coaches noticed, and Nichols moved to end for his sophomore season.

"I could already tell, 'This kid is going to be a monster on the defensive line,' " Clark said. "That's what he became."

Along with Nichols' physical gifts of size, speed and quickness, what stood out to Clark was his enthusiasm.

"He just loves everything about football with an almost innocent wonder -- like a kid opening presents on Christmas morning," Clark said. "He loves to play, but he also loves practicing and being at the facility. He loves working out. He loves being in the weight room. He loves doing sprints.

"I think he loves being coached hard, too, which is different."

Nichols missed much of his sophomore season after breaking his right forearm in a junior varsity opener -- the Springdale coaches didn't want his first game to be on the varsity level -- but he came back to play the final five games in 2015.

The injury, Nichols said, was a plus because it gave him time to learn more about football by watching games from the sideline and studying film.

As a junior defensive end, Nichols had 54 tackles, including 12½ for lost yards, and 2½ sacks.

Playing end and tackle as a senior, Nichols dominated with 30 of his 73 tackles going for lost yards, including 8½ sacks. He also had 49 quarterback hurries.

"Early in his junior season, he was extremely disruptive," Clark said. "By the middle of the year to the end, he made a ton of plays.

"I remember in spring football going into his senior year, we had to hold him out the last two or three practices -- just so we could have practice. I mean, he hijacked the practice.

"Nobody else was getting anything done. He was just a man among boys."

Nichols said his first scholarship offer was from Arkansas State University. It came in February 2016 after his sophomore season.

By the end of that spring, Nichols had about 15 offers, including Mississippi State and Missouri from the SEC.

Nichols got the offer he most wanted -- from the University of Arkansas, Fayetteville -- in June 2017 when he participated in the Razorbacks' camp for linemen.

"I came in with a chip on my shoulder," Nichols said. "I really wanted to prove to Arkansas that I was worthy of an offer."

"I was into it," Nichols said. "I took coaching from Coach Scott really well. Everything he told me, I tried to do it to the best of my ability."

Nichols committed to Bret Bielema, the Razorbacks' coach at the time, and planned to be an early enrollee.

After Bielema was fired, Nichols said he still wanted to come to Arkansas but wasn't sure how he would fit in with the next coaching staff.

Nichols said other schools began showing interest and wanted him to take a recruiting visit, including Oklahoma and Georgia.

"It was pretty crazy with everything that was happening," Nichols said. 'I didn't know what the future was going to hold."

New Razorbacks Coach Chad Morris made an in-home visit to Nichols and assured him he was still wanted at Arkansas.

Nichols, who enrolled at Arkansas in January and went through winter workouts and spring practice, said it was a plus Morris retained Scott on the staff.

Scott is coaching defensive tackles, where Nichols played in the spring.

"I knew if Coach Scott left they'd bring in another great coach, but the fact he's still hear reassured me that this was the place I needed to be," Nichols said. "That was kind of the cherry on top of me wanting to stick with Arkansas."

"I learned a lot," he said. "I did some good and some bad, but I got a lot better with the technical stuff you've got to work on to be good, especially in the SEC."

Clark, a quarterback at Arkansas and the University of Central Arkansas, said he expects Nichols to be an impact player.

"Everybody's got a ceiling, but I just don't know what his is right now because football is still so new to him," Clark said. "His ceiling is really high, I can tell you that."

Isaiah Nichols at a glance

NOTEWORTHY Early enrollee in January who went through winter workouts and spring practice. … Worked at defensive tackle in the spring. … Consensus three-star recruit by ESPN, Rivals and 247Sports. … Rated the No. 6 player in the state of Arkansas by ESPN and the No. 59 defensive tackle nationally. … As a senior at Springdale, had 73 tackles — including 30 for lost yards — and 8½ sacks. As a junior, had 54 tackles, including 12½ for lost yards. … Chose Arkansas over scholarship offers from Mississippi State, Missouri, North Carolina State, Kansas State and Iowa State. … Didn’t play in a football game until his sophomore season at Springdale.

The third in a series highlighting newcomers to the Arkansas Razorbacks football team.