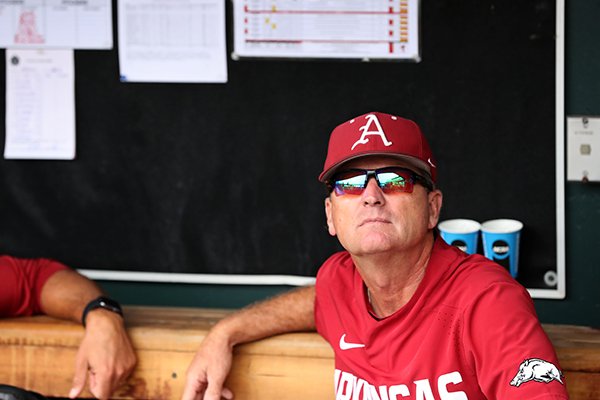 Arkansas coach Dave Van Horn watches from the dugout during a rain delay prior to a College World Series game against Texas Tech on Wednesday, June 20, 2018, in Omaha, Neb.

Van Horn said Tuesday night that he has agreed to a contract extension.

Talking to the media before an appearance at the Harrison Area Razorback Club, Van Horn indicated the extension will be through the 2023 season with options for the 2024 and 2025 seasons.

Van Horn's current contract, extended in July of 2015, runs through the 2021 season. His annual financial package before bonuses is $775,000.

"I guess if I win enough we get to add some more years," Van Horn said with a smile. "I'll get a couple years added to that possibly, and then there might be a couple more in there if things go well."

Things have gone well for Van Horn at the University of Arkansas, Fayetteville, where he was an All-Southwest Conference second baseman in 1982, served as a graduate assistant for Coach Norm DeBriyn from 1985-88 while completing his degree after three years in the Atlanta Braves' organization and succeeded DeBriyn as head coach in 2003.

The Razorbacks finished second at the College World Series to Oregon State this season in their fifth CWS appearance under Van Horn. He has a 643-364 record at Arkansas, including 15 NCAA Tournament appearances.

Van Horn said he met with Arkansas Athletic Director Hunter Yurachek on Thursday and Friday to discuss the contract extension and that the two reached an agreement.

"I told him I was good with everything," Van Horn said. "I think everyone knows I want to be at Arkansas.

"It's not all about the finances. It's about being where you want to be to me."

Van Horn, 57, is the second-longest tenured coach in the SEC along with Vanderbilt's Tim Corbin behind Mike Bianco, who became Ole Miss' coach in 2001.

Van Horn said an official announcement about his contract extension with the details will be made by UA officials in the near future.

"Whatever they do to make it right," Van Horn said of finalizing the deal. "When they put it front of me, I'll read it and then I'll sign it and move on.

"I'm not planning on retiring any time soon."

Van Horn said he and Yurachek also have had discussions about enhanced contracts for his assistant coaches and staff members and improving facilities for the players.

"Our program has been pretty steady for a while," Van Horn said. "I've had great coaches and really good players. Coaches that do a good job of recruiting and players who work hard.

Van Horn also talked Tuesday about the 2019 schedule which includes a Texas team with extra motivation to play the Razorbacks.

The Razorbacks will play a two-game midweek series in Austin, Texas, after the Longhorns came to Baum Stadium and were beaten 13-4 and 7-5 this season.

Arkansas added an 11-5 victory over the Longhorns in the opener of the College World Series in Omaha, Neb.

"They'll be waiting on us," Van Horn said. "They're going to save somebody really good [to pitch] for that Tuesday and Wednesday for us. But that'll be a good challenge."

Arkansas also will play a road series at Southern California, which the Razorbacks beat 2 of 3 games at Baum Stadium this season.

Grambling State will be the opponent when the Razorbacks play their annual game at Dickey-Stephens Park in North Little Rock, Van Horn said,

Along with discussing his contract extension and the 2019 schedule, Van Horn hit on some other topics Tuesday:

• Pitcher Kevin Kopps, who redshirted last season after undergoing elbow surgery, is recovering well and should be ready for fall practice.

• Arkansas has talked with Oklahoma about playing in the fall when teams will be allowed to play two exhibition games without losing regular-season games under a new NCAA rule.

Van Horn said he has quickly developed a good relationship with Yurachek, who was hired at Arkansas on Dec. 4 from the University of Houston.

"Hunter has been great ever since I've met him," Van Horn said. "He's been really easy to work with. He really listens to our needs and what we're thinking as far as just for the program."

Van Horn said he didn't ask for improved facilities when he gave Yurachek a tour of Baum Stadium, but that Yurachek said without being asked that he could see some upgrades are needed.

"I really didn't say anything. I just let him take it all in," Van Horn said. "We sat down in my office after that, and he just started talking, and it was really good to hear. He didn't think it was good enough.

"He knows what we're competing with, expansions and new stadiums across our league, and that we need to do some better things for the players."

Van Horn said he's hopeful for a facility at Baum Stadium that will include a new locker room, weight room and nutrition center along with a pregame warm-up area and that it is completed for the 2021 season if not sooner.

"It's just getting rolling now," Van Horn said. "They're in the design phase. It has to go in front of the board [of trustees] here in the next few weeks and get approved. We're hoping that'll be smooth."