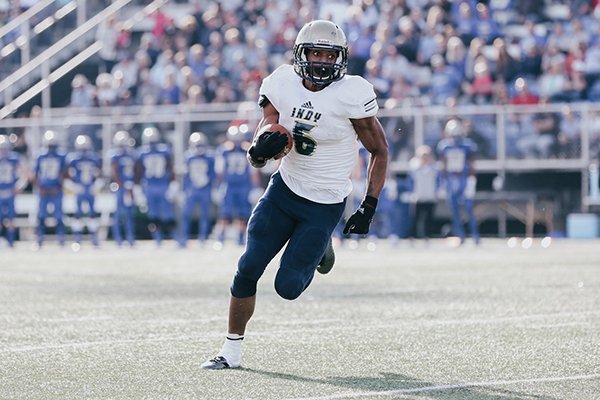 Independence (Kan.) Community College Coach Jason Brown has tutored some great talent through the years, and University of Arkansas, Fayetteville running back Rakeem Boyd is one of the best.

"Probably an NFL first-rounder," Brown said. "He's as good of a back as I've had and I've had some great ones. I've got 27 guys in the NFL and he's as good as any of them."

Boyd, 6-0, 210 pounds, was highly touted coming out of Houston Stratford and rushed for 6,436 yards and 80 touchdowns in his career before signing with Texas A&M in 2015. ESPN rated him a 4-star prospect and the No. 23 running back in the nation.

Academics forced him to leave College Station last year as a redshirt freshman and enroll in the Kansas junior college.

Brown grew up a Eric Dickerson fan and sees similarities between the former SMU and NFL great and Boyd.

"He reminds me of Eric Dickerson with his running style -- north and south guy," Brown said. "He has to get into the weight room and get durable. Not that he missed a lot with us, but he's going to take a bigger pounding and it will be a little faster so he'll be fine. He's a true gamer."

Going from the SEC to junior college was a humbling experience for Boyd.

"Oh man, it was horrible," Boyd said. "It was rough. I wasn't talking to friends and not many people. I was kind of down and just working out everyday. It just made me want to change my life around so I had to do everything right."

Boyd started eating better and being around others to help him get back on track.

"I wanted to be surrounded around better people," Boyd said. "Being around those people made me realize how much I cherished football and education. It just really made me go farther in life with new friends. Not necessarily with friends, but hanging out by yourself sometimes."

"Don't be in everybody's business. Just kind of stay to myself."

The new Boyd started to flourish and he ended up rushing 192 times for 1,211 yards and 14 touchdowns for the Pirates last year. His recruitment was slow until he put out his highlight video which caught the attention of Razorbacks associate head coach and running backs coach Jeff Traylor.

"I know it was very special when he called me," Boyd said. "I couldn't believe it. This is Arkansas."

He eventually chose the Hogs over TCU, Arizona, Colorado and others a day after his official visit to Fayetteville in January. Traylor was a major factor for him deciding to be a Hog.

"I went on the visit and he was just so real with me and honest about everything," Boyd said. "At that point, I was just down for it. He didn't lie about anything."

The people at Arkansas and Fayetteville also won him over.

"The coaching staff, the people around there, it was great," Boyd said. "The facilities are amazing. Big. Everything felt at home so I pulled the trigger."

Brown and his staff are demanding of their players and Brown doesn't apologize for the high expectations of his players.

"I tell these kids everyday, 'Hate me now, love me when I get you a scholarship and get you out of here,'" Brown said. "I make it harder here than it is at a four year simply because I've sent 190 kids to Division I and never had a kid get kicked out of a four-year school. That's kind of what I pride myself on so we make it harder here."

Boyd knows many guys don't ever get to a four-year school after enduring the nonglamorous life of junior college football.

"Most guys will go to juco and be done with football afterwards," Boyd said.

Brown said eventually Boyd settled in after some early struggles.

"He bought in, finally took him a minute and a few ass-chewings and so forth, but he bought in and became a great kid," Brown said. "Everyone loves him around here."

Having a second chance to play in the SEC is something Boyd cherishes.

Brown and Independence will be on Season 3 of Last Chance U on Netflix starting July 20. Boyd and four other players on the team will be featured on the Emmy-nominated series that gives a behind-the-scenes look into a junior college football program.

"We graduated 40 kids last year at mid-year for Division I, which is the national juco record," Brown said.

Boyd, who has three years to play for the Razorbacks, is focused and looking forward to life in Fayetteville.

"I want to get a good education and I want to go over 1,000 yards and just accomplish a lot of goals, maybe newcomer of the year," he said.

Rakeem Boyd at a glance

The fifth in a series highlighting newcomers to the Arkansas Razorbacks football team.