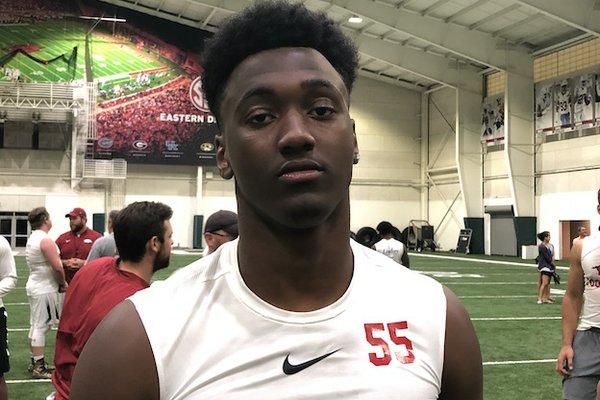 A little over a month later, he’ll announce a winner out of that trio with the Razorbacks hoping to be the last one standing.

“My top three will come out on July 30th,” Young said. “Then after we play our three non-conference games I will make my decision.”

That decision would come after the Wolverines host Oklahoma power Owasso (Aug. 24), Fort Smith Southside (Aug. 31) and Bryant (Sept. 7). That's ahead of its 7A-Conference West opener at Fayetteville (Sept. 21), which comes after an off week.

He has visited several times with the new Razorback staff, including head coach Chad Morris, defensive coordinator John Chavis and defensive ends coach Steve Caldwell. He is slated to be back for the Woo Pig Cookout the weekend of July 27-29.

“I really like Arkansas and that is why they are going to be in my top three,” Young said. “I am going to their cookout and that will be pretty fun.”

Young, one of nine in-state prospects that the Razorbacks have offered in the 2019 class, has visited Arkansas, Missouri, Vanderbilt, Louisiana Tech and Tulsa unofficially so far.

“It will be about the location, the coaches and the people that are going to be there - the players who I am going to be around,” Young said. “I like Coach Caldwell, Coach Morris and Coach Chavis. I really like the coaching staff.”

Young, who earned his offer from Arkansas after a solid camp performance in June, had 85 tackles last season with 13 sacks, 4 tackles for lost yardage, 5 pass deflections and an interception with a forced fumble as a junior.

“I think my strengths are that I can do a little bit of everything - dropping back in coverage, rushing the passer, just playing a true outside linebacker,” Young said. “I need to get more in shape. I was gone to Atlanta for like a month and got out of shape a little bit, but that is exactly what we are doing right now. This conditioning will get me right.”

Bentonville West was 9-2 and finished second in the 7A-West last season in only the second year of the program’s existence.

The Wolverines won their first nine games before losing to Bentonville (37-28) in the regular season finale and to visiting Conway (48-40) in the state playoffs after earning a bye.

That has Bentonville West players hungry in the off-season and putting in work during 7-on-7 games and in the weight room.

The Wolverines lost four of its five starting offensive linemen, but return 11 starters in the other 16 positions. Several are Arkansas targets.

Among them would be senior wide receiver Jadon Jackson (62 catches, 1,241 yards, 14 touchdowns last season). Arkansas is recruiting Jackson as a defensive back. He has the Razorbacks in his top five.

The Hogs also are recruiting quarterback Will Jarrett. He threw over 3,500 yards last season and is a three-year starter.

Also on the UA radar is tailback Tyrone Smallwood. Smallwood is a Pennsylvania native as is Jackson. He rushed for 784 yards and 10 touchdowns last season.

“Everybody on the team is thinking about state,” Young said. “Everybody wants to go to state and we are thinking we have all the tools and weapons to do it. We have a lot of seniors and we’ve all been together for awhile - ever since we were freshmen. We all know each other well so we are just trying to take it to the next level.”